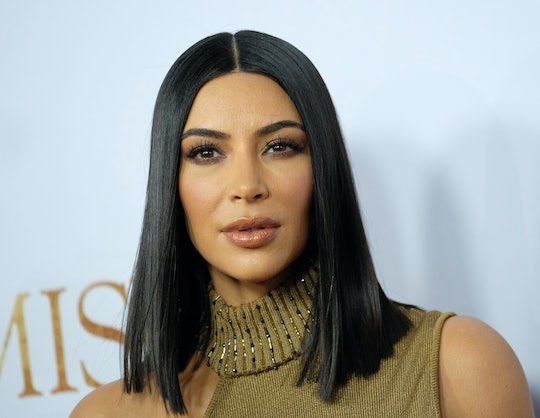 Kim Kardashian in known for her glamour, perhaps above all else. From the red carpet to heading out for a low-key Mother's Day outing with her daughter, the reality maven is always dressed to the nines with her makeup on point and looking flawless. I mean, have you looked at the woman's Instagram lately? (Don't even answer that, we all have.) But even though her legions of fans look to her as a style and beauty icon, the 36-year-old doesn't always view herself so glowingly. In fact, Kim Kardashian revealed she suffers from body dysmorphia on Sunday night's episode of Keeping Up with the Kardashians. And that may initially sound completely shocking, considering who she is, but it's actually hard not to sympathize with her body struggles.

And that's because her professed insecurity is relatable to so many people — except Kardashian experiences a level of public scrutiny that the rest of us probably could not sympathize with. It would be disconcerting and more than a little emotionally draining, after all, to have to deal with people all over the world critiquing photos of your body from behind their computer screens, especially if the photos had been taken without your consent or knowledge.

That's exactly what happened to Kardashian when she took a trip to Mexico with her sister Kourtney Kardashian and 16 friends to celebrate Kourtney's 38th birthday back in April. At the time, paparazzi snapped photos of her in a bikini, and seeing the images — and the unflattering, mean headlines they inspired — later proved to be somewhat of a breaking point for Kardashian.

"You take pictures, and if they're not perfect, people just body shame you and criticize you," she shared on Sunday's episode of Keeping Up with the Kardashians, according to PopSugar. "For people to just think that's OK is so frustrating."

She really has a point. It would hurt most people's feelings to overhear a stranger making a negative comment about their body. And Kardashian is basically hit with that 24/7, in the most public possible way, with no one even trying to talk about her behind her back. They do it right in the open, under blaring gossip magazine headlines and in endless social media posts. Such treatment really takes a toll, as Kardashian shared with a friend later on in the episode:

I can't have fun after seeing those pics. It's just wild, because there's other pics where I look so good, and it's just from a different angle. It's like literally giving me body dysmorphia. ... People think I'm so confident and I'm so secure, and I'm not. I'm so insecure. I just can't take it.

According to the Mayo Clinic, body dysmorphia is defined as "a mental disorder in which you can't stop thinking about one or more perceived defects or flaws in your appearance — a flaw that, to others, is either minor or not observable." This could result in a person's anxious and ashamed enough to avoid social situations, and can be caused by life experiences involving "negative social evaluations about your body."

In the episode, Kardashian doesn't reveal whether she's actually been diagnosed with this anxiety disorder or not, but the sentiment certainly rings true either way. Even though she's been lauded for promoting body positivity, it makes sense that the unrelenting, often malicious, criticism of her body would have a negative effect on her after so many years in the limelight. Some people would say that this is the price of fame for a celebrity as high-profile as Kardashian, but it's important to remember that she is a person with feelings and very real insecurities, just like the rest of us.