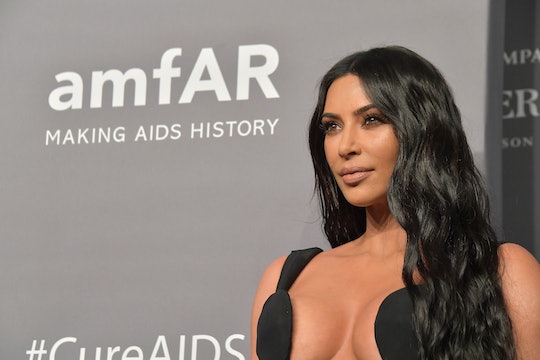 Kim Kardashian Reveals She Wants To Become A Lawyer, Just Like Her Famous Father

Kim Kardashian wears many hats. She's a fashion icon. A makeup mogul. A reality TV star. A soon-to-be mom of four. A sister, a wife, a daughter, and an influencer — among others. But now, it looks like the Keeping Up with the Kardashians star is heading in a completely different direction. That's because Kim Kardashian revealed she wants to become a lawyer, following in her father's footsteps.

Yes, you read that correctly. Kim K is currently studying to be a lawyer. Like, full-on, pass the bar exam and everything. You'll probably recall that Kim K's late father, Robert Kardashian, was OJ Simpson's defense attorney during his murder trial back in 1995. Between her dad's legacy and Kardashian's own recent success in the legal-sphere, she's ready to take on a new challenge. The KKW Beauty star shared her news during a recent interview with Vogue. Apparently, Kardashian already started a four-year apprenticeship with a law firm in San Francisco. She plans on taking the bar in 2022.

While surprising, this news isn't entirely out of the blue. You might remember Kim K petitioned President Donald Trump to commute the life sentence of Alice Marie Johnson — who is a nonviolent drug offender — in 2018, according to CNN. Johnson was ultimately released, according to the publication. What's more is, as a result, a major piece of criminal justice reform legislation called the FIRST STEP Act was signed into law in December, The Guardian reported. Talk about a major win, right?

"I had to think long and hard about this," Kardashian told Vogue, in regard to her decision. “I never in a million years thought we would get to the point of getting laws passed. That was really a turning point for me.” She added:

The White House called me to advise to help change the system of clemency. And I’m sitting in the Roosevelt Room with, like, a judge who had sentenced criminals and a lot of really powerful people and I just sat there, like, Oh, sh*t. I need to know more.

Kardashian went onto explain that she wanted to be able to "fight for people who have paid their dues to society," according to People. "I just felt like the system could be so different, and I wanted to fight to fix it, and if I knew more, I could do more.”

If you're like me, you're probably sitting there, scratching your head and wondering how in the heck Kim Kardashian is working toward becoming a lawyer — when she doesn't even have a college degree. It turns out, in California, individuals can apprentice with a practicing lawyer or judge instead of going to law school, according to Elle. Who knew?

This summer, Kardashian plans to take the "baby bar," according to Vogue. If she passes that, then she'll be able to continue studying for three more years before tacking the actual bar. "First year of law school, you have to cover three subjects: criminal law, torts, and contracts," Kardashian told the publication. "To me, torts is the most confusing, contracts the most boring, and crim law I can do in my sleep. Took my first test, I got a 100. Super easy for me." She continued:

The reading is what really gets me. It’s so time-consuming. The concepts I grasp in two seconds.

Is it just me, or is Kim Kardashian way more of an intellect that most people give her credit for? I'm seriously impressed.

In case you were curious, Kris Jenner is incredibly proud of her daughter. "You are so beautiful and I am beyond excited for you and oh so proud!!! 👏🏼👏🏼👏🏼 💕💕💕 ✨✨✨," the momager commented on Kim K's Instagram post about her Vogue cover. And I have a feeling her father, Robert Kardashian, would be proud, too.