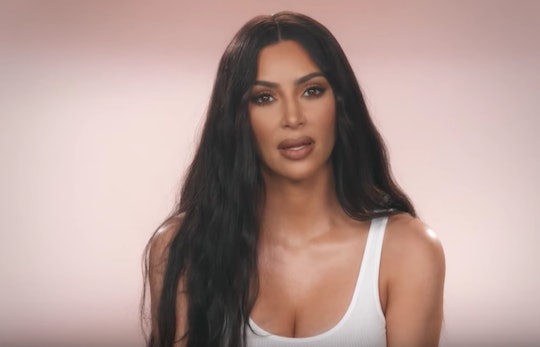 Kim Kardashian and Kanye West's little family of four is so sweet. People have been delighted to see their family expand and watch their kids grow up over the past six years. But, fans shouldn't count on their family expanding any more, any time soon. This is because Kim Kardashian reveals she's done having kids for now, and her reasoning is completely valid.

The Kardashian-West family is absolutely precious. The siblings not only look so much alike, but seem to have their own unique and special personalities. Kardashian and West are parents to four young kids — 6-year-old daughter, North; 3-year-old son, Saint; 1-year-old daughter, Chicago, and 3-month-old son, Psalm — and clearly have their hands full. But just because they seem to have everything under control (according to Kardashian's Instagram account) and look so happy, people shouldn't count on the family to expand any time soon.

During a question and answer session on Kardashian's Instagram account, she revealed that she and West are done having kids, and it might be a while before she changes her mind about this. "I love my babies so much, but four is all I can handle with how busy I am," she wrote. "Each one of my babies needs so much of my attention."

It's so easy to see where she's coming from. Kardashian's kids are so young, and having two kids practically still in diapers isn't easy, especially when your schedule is jam packed like her and her husband's. And because of this, it's understandable to see why she might want to put a hold on having more kids. Saying that she has her hands full is an understatement. She is currently studying to become a lawyer, has her own cosmetics line, and has her own shapewear line debuting next month, on top of the many projects it seems like she continues to take on. Needless to say, her attention is everywhere right now. And it doesn't sound like she wants to tear away her attention from her four babies any time soon.

But this isn't to say that her answer might change in the future. In the past, Kardashian has always said that she has wanted six kids, just like her mom, according to Parents. She has changed her mind about this subject over the past few years. In April 2018, she told Elle that she would stop having kids after baby number four, because she can't handle more than that. "My time is spread really thin," she said. "And I think it's important that in all couples, the mom gives the husband as much attention as the kids."

Clearly, her answer hasn't changed much over the past year and few months.

People should let Kardashian enjoy her family without putting the pressure on her to have it change in any major way — and she is doing exactly that. Earlier this week, Kardashian shared an update about her youngest son, Psalm, with her fans on Instagram. "My little man is the sweetest ever!," she wrote. "He's honestly the best baby. Sleeps through the night and by far my most calm. How did I get so lucky?"

Whether she keeps her family the same or decides to have six kids, she is embracing being a mom to her four adorable kids for all that it's worth.