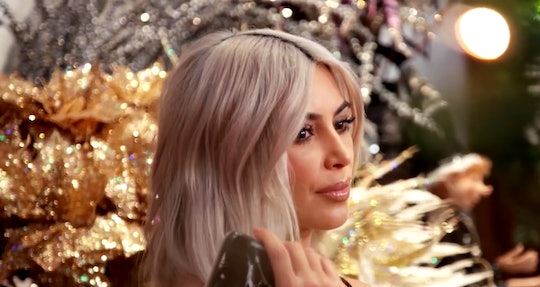 If anyone needs proof that the KarJenner family was extra long before they became reality TV royalty, they don't have to look any further than their annual Christmas card. For years, the clan has posed for a holiday-themed photo, and it seems the tradition only became more elaborate as time went on. But fans of the family may be disappointed to learn that not only will a Kardashian Christmas card not be happening this year, there likely won't ever be another one. In an interview with E! News, Kim Kardashian revealed why her family's Christmas Card tradition is officially over for good, and honestly, the whole thing just seemed majorly stressful.

The Kardashian family Christmas card appears to be a tradition that actually predates the youngest KarJenner siblings, Kendall and Kylie — according to Cosmopolitan, Kendall made her official Christmas card debut in the all-white-themed shoot in 1995, though a number of cringeworthy and super-dated cards had already been shared in years previous — and it likely just boils down to matriarch Kris Jenner's love of the holiday.

In an 2016 interview with Glamour, Kris explained that she gets so excited for each year, and said, "I swear, I'm like 5 years old. I cannot wait for Christmas morning."

But from the sounds of it, even Kris might be ready to call it a day on the yearly holiday card. Kim told E! News that between each of the siblings' demanding schedules, coupled with the fact that nearly all of them are now parents, it's proven too difficult to continue getting everyone together for a pic. She told the news outlet, "Kris Jenner has given up. She just is like, 'I don't have the energy to wrangle all my kids anymore, and their kids'."

But of course, it's not simply about scheduling. As much as fans of Keeping Up With The Kardashians may look forward to seeing the card each year, it's no secret that it's a major undertaking that can lead to some serious family drama. In the family's 2017 card, Rob Kardashian was notably absent, as was Kylie Jenner, amid swirling rumors of her then-unconfirmed pregnancy. But viewers now also know that, behind the scenes, things had become seriously tense.

Kim admitted to E! News that the 2017 Christmas card "really did just f*ck [them] over," after ongoing squabble about scheduling resulted in an epic on-camera argument between Kim and Kourtney, in which Kim referred to her sister as "the least exciting to look at."

But while it sounds like the KarJenner Christmas photo shoots may truly be done forever, it doesn't necessarily mean the tradition won't continue in a different form. When a fan tweeted in November that it seemed like the 2017 card drama may mean there won't be another one to come, but that a West family card would be amazing, Kim responded, "Wow reading my mind."

And it also sounds like Kim and husband Kanye West are also taking on another family tradition this year: Kim told E! News that they would actually be hosting the family Christmas Eve party this year, taking over the reigns from Kris, who traditionally hosted everyone at her home in Calabasas.

Even though the official cancellation of the Kardashian Christmas card does seem like the end of an era, it does make sense that perhaps it was all just getting a little bit too out of a hand — especially if it was causing some major arguments. And, well, let's be honest, even with the super glam, highly-stylized shoots that have dominated the family's cards in recent years, is it even possible for anything to top their gloriously retro, coordinated family cards from the '90s and early '00s? I think not.