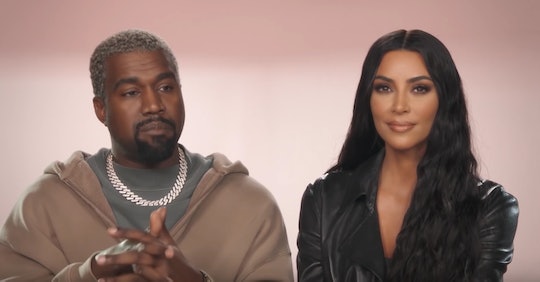 Kim Kardashian and Kanye West's family of six is the sweetest little family of all. Their four kids together are growing up so fast, including their newest of the bunch, Psalm. Fans will love Kim Kardashian's new video of her "baby Psalm" because it proves he's getting so big.

West and Kardashian's four kids — 6-year-old daughter, North, 3-year-old son, Saint, 1-year-old daughter, Chicago, and 4-month-old son, Psalm — are all so unique in their own ways. In spite of looking so much like each other, the kids have different interests and personalities, which can be seen on Kardashian's Instagram account, where she shares the cutest videos of them. On Friday, Oct. 4, people finally got to see more personality from Kardashian and West's youngest child. Kardashian took to Instagram, where she shared the sweetest video of baby Psalm.

In the video, Psalm can be seen laying down, looking at Kardashian (standing behind the camera), and wiggling around. His focus and determined gaze on her is strong, and you can tell the little boy wants to talk or get on his feet ASAP. Even Kardashian seems to think so. "You want to talk so badly!," she says in the video.

In the caption, she shared an update about her son, letting everyone know about how he's changed over the past few months. "My baby Psalm is getting so big," she wrote. "He started off looking like Chicago but now he's Saint's twin!"

It's clear as day that Psalm has the same eye shape and chubby cheeks as his older brother, Saint. But, I personally think the little boy also looks so much his dad. You can see in their faces.

Kardashian's followers seem to think the same, taking to the comments of the video to fawn over him.

"Can't wait to see him playing around with his sis and brother," another commenter added.

Although it will be quite a while before Psalm starts to talk and walk on his own two feet, he's already grown up so much over the past few months. It's hard to believe that Psalm was just born in May through a surrogate, according to Harper's Bazaar. And over the past five months, Kardashian and West have had their hands full. Although they're busy working on new albums (West is going to release his soon, according to Esquire), clothing lines (Kardashian's soultionwear line, Skims, keeps on selling out, according to TMZ), and studying to be a lawyer (Kardashian is currently in the process, according to CNBC), Psalm has been the least of their worries.

In August, Kardashian took to Instagram where she admitted that Psalm is so chill. "My little man is the sweetest ever!," Kardashian wrote in the caption of the Instagram post. "He's honestly the best baby. Sleeps through the night and by far my most calm. How did I get so lucky."

And a month later, Kardashian admitted to Entertainment Tonight that adding Psalm into their family has made everyone super relaxed. "My two older kids would fight a little bit and now, since the baby's here, everyone gets along, everyone loves each other," she said. "I'm rolling with it. It really is zen. It feels really equal and calm and great."

Psalm really does seem so sweet and calm. But Kardashian should give him a few more months until he starts walking and talking to make affirm that this calm household is the norm.