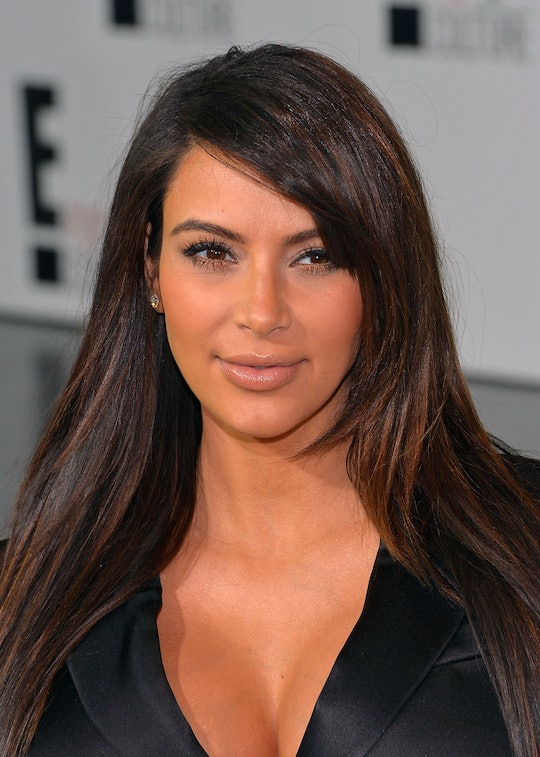 For some women, pregnancy makes them feel the most confident and sexy that they've ever felt in their lives. For others, though, being heavily pregnant is a major sexy-time killer — whether it's because they're exhausted, have literally zero sex drive, or just feel large, awkward, and incredibly un-sexy. (I know I definitely fall into this camp when I'm with-child.) Truthfully, there's not really a "right" way for women to feel when it comes to sex and pregnancy. With that said, Kim Kardashian thought she was "never going to have sex again" when she was pregnant. And I'm pretty sure more than a few women can relate.

During an interview for a 20th anniversary cover story for Richardson Magazine, the mom of three confessed that pregnancy did not make her feel particularly sexy. “I was somebody who gained 60 or 70 pounds in my pregnancies and felt so unlike myself and so unsexy,” the Keeping Up With the Kardashians star told the publication, according to Us Weekly. “Literally, at the end, when you can’t even have sex, I thought, ‘I’m never going to have sex again in my life!’ I just felt so bad about myself in my soul.”

(Spoiler alert: She did go on to have sex again.)

Although Kim K. said she didn't end up losing the weight vey quickly, about eight months later she "had probably (her) best body ever." Kardashian told Richardson Magazine, “I felt like, ‘I did this. I lost all this weight on my own. I feel better than ever!’ I just put my body through that, and it was so empowering when I did a nude shoot.”

Kardashian has opened up about her difficult pregnancies with her two older children — North and Saint West — in the past. The KKW Beauty mogul had a life-threatening condition called placenta accreta after delivering both North and Saint. "After giving birth, your placenta is supposed to come out. But mine was stuck," she told Elle magazine. "That's what women usually die from in childbirth — you hemorrhage and bleed to death and they can't stop it. To get it out — it's so disgusting — the doctor had to stick his whole arm in me and scrape it off. It was the most painful." It was because of her traumatic experiences with placenta accreta and preeclampsia that she and Kanye West made the decision to use a gestational carrier with their third child, Chicago, according to the publication.

Baby Chi was born on Jan. 15, according to People. And although she arrived safe and sound — without Kardashian having to endure life-threatening complications — the process was still difficult for her. “You know, it is really different,” she told E! Online. “Anyone that says or thinks it is just the easy way out is just completely wrong. I think it is so much harder to go through it this way, because you are not really in control.” She continued:

Obviously you pick someone that you completely trust and that you have a good bond and relationship with, but it is still … knowing that I was able to carry my first two babies and not my baby now, it’s hard for me. It’s definitely a harder experience than I anticipated just in the control area.

I don't know about you, but to me, hearing that Kim Kardashian — a woman who exudes sexiness and confidence — felt decidedly un-sexy during pregnancy is reassuring. I'm newly into the third trimester of my fourth pregnancy, and I feel this so hard right now. Nothing about how my body currently looks or feels is sexy to me. I just have to keep reminding myself: Even though it may feel like it, I won't be pregnant forever — and neither will my lack of mojo or tanked body confidence