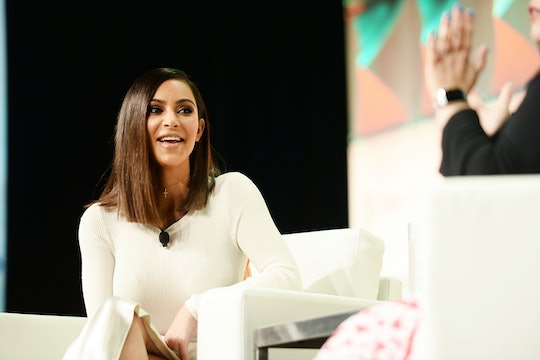 The Kardashian family knows how to celebrate. When it comes to parties, they don't let any detail go unnoticed. From birthdays to Christmas to Mother's Day, they know how to celebrate everything right. So, of course, Kim Kardashian threw Chicago an Alice In Wonderland themed first birthday party over the weekend — and, of course, it looked like the hottest party of the year.

Just last week, Kardashian's youngest child, Chicago (or Chi, which is what her parents like to call her), turned a year old on Tuesday, Jan. 15, according to W. Chicago's birthday was incredibly low-key — the family got together for her birthday dinner where she was gifted the most perfect kid's sized car by Kardashian's older sister, Kourtney Kardashian. But leave it to the Kardashian family to make sure that the event didn't go uncelebrated.

The family waited until Saturday to really celebrate Chicago's first birthday. On the day of the party, Kim took to Instagram — where she shared videos of Chi's birthday party before guests arrived — and it looked absolutely gorgeous. Kim (and her party planners) took the party's Alice In Wonderland theme to a new level. Guests were reportedly greeted by the real life characters from the cartoon movie, according to E! News, and Kim's house was turned into a real life maze.

In photos from the party, posted to Kim's Instagram story, the attention to detail definitely shows. It looked like such an amazing party.

All of the activities sound like so much fun, as well. A source told E! News that Kim left no detail unnoticed for the smallest guests in attendance. The source said:

The inside was designed like an outdoor garden with faux grass, red roses, and a fun maze for the kids to run through. Outside they had a bounce house and Alice characters to entertain the kids. The characters had a tea party with the kids and played chess with giant chess pieces. They read them stories and helped them at a Mad Hatter station where they could make different hats and headboards.

Doesn't that put your kid's first birthday to shame?

And the guests looked like they had such a good time. Not only did they enjoy the bouncy castle in Kim's backyard, but they also got to take home a stuffed animal, which is the cutest idea ever. Even Chrissy Teigen's children with husband, John Legend — Luna and Miles — attended the party — but don't be fooled by her daughter's unhappy face. Teigen revealed that Luna had a great time, even if she looks "like she stole something," according to Teigen's Instagram post.

In all honesty, Chicago deserves to be celebrated like this. The little girl, who was born via a surrogate last year, has been such a blessing in Kardashian and West's lives. During an appearance on the podcast, Pretty Big Deal, in October, Kardashian opened up about her daughter and the surrogacy. Kardashian said, according to People:

I think it was the best decision I ever made. I think it was such an amazing experience. I would recommend it for anyone. All my fears of everything that I thought was gonna happen, like, am I gonna connect? Am I gonna feel connected? All of that goes out the door and you just instantly feel connected.

Kim also called her little girl "such a doll" which is so adorable.

Because this has been such an amazing year for Kim, it makes sense that she would want to honor her daughter with such a great party like this one. And now the rest of Chicago's parties will have to live up to some amazing expectations.