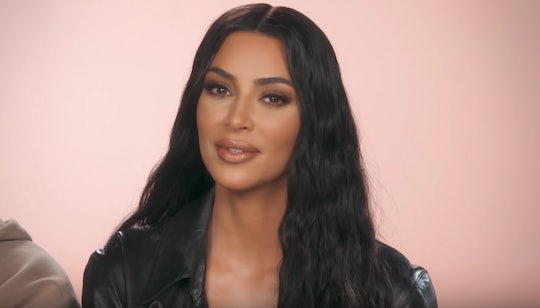 Kim Kardashian Is Planning A Very ~*Chill*~ Baby Shower To Celebrate Baby No. 4

The countdown until Kim Kardashian's newest addition is born is fully underway. After announcing that her surrogate is due with baby number four in May, she is doing everything in preparation for the baby's arrival — including planning a baby shower, of course. But, fans might be surprised to know that Kim Kardashian's baby shower theme for baby number four is a little unexpected, but totally chill.

Kardashian and her husband, Kanye West, will be welcoming their fourth child (and second through a surrogate) next month, according to The New York Times. Since the couple has three kids under the age of 5 in their home already — daughters, North and Chi, and son Saint — and are going to add another young one into the mix, things are, as expected, a little chaotic.

"It's madness, but the best madness," Kardashian told The New York Times over the weekend.

Since there is so much madness going on in her life at the moment, it makes sense that she would want to chill out and relax during her fourth baby shower, which will have a "zen, CBD theme", according to E! News.

"This year, because I am freaking out so much, I just want a zen-like CBD-themed baby shower," Kardashian told E! News on Tuesday. "I just want massages, I want to do like a tea ceremony with crystals, and we're going to drink at this baby shower — we're not pregnant."

TBH, that sounds so relaxing.

People might be surprised that Kardashian is having a shower for her fourth baby, as she welcomed her third child via surrogate in January 2018, so she probably has everything she needs, right?

For every single Kardashian-West baby, the family has thrown a baby shower. In 2013, Kardashian had a "garden goddess" themed baby shower, according to Us Weekly, to celebrate the upcoming birth of her first child, North. When she was pregnant with son, Saint, in 2015, the family celebrated with a Troop Beverly Hills inspired pajama party baby shower. And in 2017, Kardashian had an elegant tea and cherry blossom themed shower thrown in honor of baby number three, according to People.

When you have a surrogate, for me, I realized having a baby shower for Chi was actually so much more beneficial for my kids, because they saw people come. They actually saw it was like, "A new baby is coming." They got so excited for Chi to come that way, seeing that everyone was coming to celebrate the baby, so I'm actually really doing it for them.

But the shower will also be for all of Kardashian's siblings and family members, who are super close to the mom-to-be. She explained to E! News that the baby shower attendees will be getting massages and will be meditating because it will be a "calm before the storm" baby shower.

She will definitely need as many calm moments as she can get before she introduces this new baby into their family. But luckily, Kardashian has plenty of experience with this, and seems to be super "zen" about it all already.