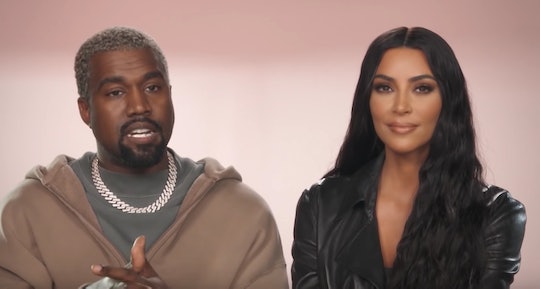 The arrival of Kim Kardashian and Kanye West's fourth child (and her second born through a surrogate) is imminent. So, in honor of his arrival (which is coming up any day from now), a baby shower was held in their honor. From the looks of it, Kim Kardashian's CBD-themed baby shower was the perfect way to celebrate their son's arrival — she is more than blissed out ahead of the big day.

On Saturday, guests gathered at Kardashian and West's home for a zen-like, meditation-themed baby shower, according to People. Although it might not sound like the most traditional of baby shower themes, it looked like it was perfect for the couple and their guests. Not only did everyone look dressed for the occasion but the outdoor party looked absolutely gorgeous. Every single detail mattered.

Instead of showering Kardashian, Kardashian really showered her guests with gifts during the party. Attendees got to make CBD-infused body scrubs, CBD-infused body oils, and got to take home a pair of Yeezy slides (from West's fashion line, of course), as per People. To make guests extremely zen, they got to take part in a sound bath therapy session, according to BuzzFeed.

But there were still bits of the party to remind everyone that they were attending a baby shower for Kardashian and West's son, who is due in a few weeks, according to Cosmopolitan. There was plenty of baby blue decorations at the party and there was even a "Name Game" board to have guests help name the baby, according to People.

If that didn't sound ideal enough, photos from the baby shower prove just how relaxing (and fun) the shower seemed.

It makes sense why Kardashian would have a zen-like themed baby shower — she's going to need all of the de-stressing that she can get by the time that baby number four arrives. Kardashian and West are the parents to three super young kids — 5-year-old daughter North, 3-year-old son, Saint, and 1-year-old daughter, Chicago. Adding a young baby into that mix might just be a little hard for them. There's going to be a lot of needy kids and it's likely that the couple won't be getting a lot of sleep because of it.

But, she's more than ready to handle four children at once, according to Page Six. During an appearance on The Tonight Show Starring Jimmy Fallon in February, Kardashian revealed that she thinks that she can take on the stress. "I was kinda stressing," she said. "My house is so full [but] I heard parents of four are the most enlightened and calm of all parents."

"I felt the huge change from one to two," she added. "That was harder than two to three."

It sounds like she's super ready for her son's arrival then, even if she hasn't exactly settled on a name yet, according to People.

And if Kardashian ever gets too stressed out when it comes to her brood, she can always rely on her homemade CBD bath salts to give her a moment of zen. Bath products containing CBD oil (the non-psychotropic component of a marijuana plant, according to Marie Claire) can help people relax, provide pain relief, and help people sleep better, according to The Zoe Report.

Although it might not be a miracle elixir, it will help her find those moments of zen when she absolutely needs them. And with a new child on the way, she certainly deserves that.