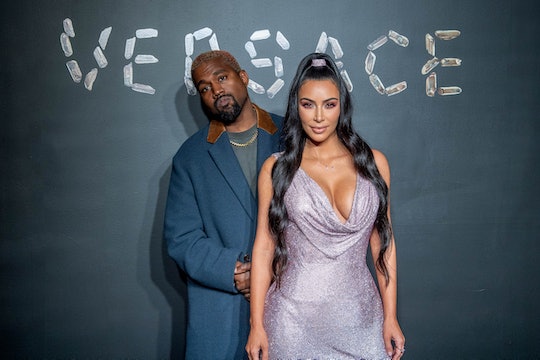 Kim Kardashian and Kanye West's kids are definitely following in their footsteps. Case in point: their oldest kid, 5-year-old daughter, North, loves fashion just as much as her parents, including her fashion designer dad, does. And based on this knowledge, it makes sense why Kim Kardashian's daughter North West threw a temper tantrum over fashion.

Little kids can be unpredictable. You never know what you're going to say or do that will put them into a tailspin and make them very upset for the rest of the day. Kardashian learned this the hard way. She took to Instagram on Wednesday to share that North had a pretty big tantrum after Kardashian said something about her outfit.

In a series of photos, North can be seen looking so happy while wearing the cutest pink snakeskin dress, matching snakeskin boots (which seem just a little too big for her), and super adorable teddy bear backpack.

"Sooooo Miss North dressed herself and thought she was ready for the day until I explained she couldn't wear my boots," Kardashian wrote in the caption.

This is clear based on North's expressions in the photos — she looks excited, content, pleased, and very upset in each frame.

It's easy for kids to feel frustrated or misunderstood by their parents at this age, especially when it comes to their outfits. Outfits are practically sacred to any little kid, especially because it's a form of self-expression. But, North is a kid, so unfortunately she will have to get used to being told what not to wear for a few more years; that's just a part of growing up.

Still, Kardashian's followers only had sympathy for the little fashionista in the making.

"Life can be so cruel," one commenter wrote.

"She really thought she was gonna go out," another commenter observed.

"Life comes at you fast," another commenter stated.

They have a point.

It shouldn't come as a surprise to anyone that North got upset over being told what not to wear. The little girl is constantly wearing very cute outfits that prove fashion is definitely a huge passion of hers. In a 2016 interview with People, Kardashian said that North is obsessed with matching her mom and taking her accessories. "She loves to pick out her clothes," Kardashian said. "She put out this slip dress with these shoes, a choker, and a tiara. And she said, 'I'm wearing this to Daddy's next concert.' And I said, 'OK, let her do it.'"

Three years later and not much has seemed to change. North seems very keen on raiding her moms clothes and picking out her own outfits. Not only is she trying to dress like her mom, she seems to be taking after her dad, too. West is the designer of Yeezy, his fashion line, where his shoes and streetwear sell out in seconds.

It's clear that North takes after both her mom and dad when it comes to her style. But it's impossible for her not to, especially since they're huge fashion icons in their own right. Hopefully, this just means that they will all be able to see eye to eye on her outfits from here on out.