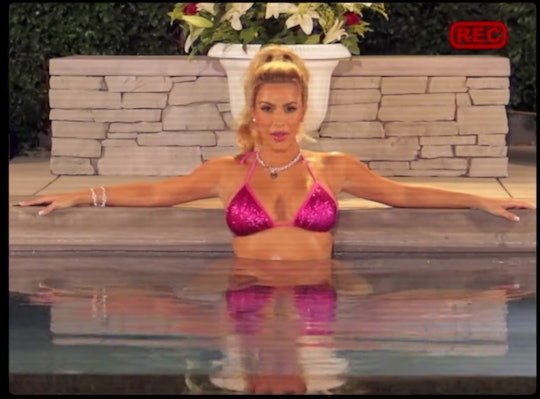 Halloween may have been won this year by a mom of four who donned two sparkly bikinis, an iconic skintight pink dress, and a bit of blonde hair dye. But Kim Kardashian's Legally Blonde Halloween costume wasn't just a flawless nod to the character Reese Witherspoon made famous in the early 2000s. It was also the perfect clap back to everyone who has mocked her dreams of becoming a lawyer.

Never one to keep things simple when it comes to Halloween, Kardashian recreated not one, but three of the looks the Elle Woods character wore in the 2001 Legally Blonde film. What's more, the Keeping Up With The Kardashians star also made a shot-for-shot remake of Woods' infamous Harvard Law School video admissions essay. To borrow a few words from Woods, "What, like it's hard?"

Kardashian shared both her costumes and video masterpiece with fans over social media on Thursday. "Oh, hi. I'm Elle Woods and for my admissions essay I'm going to tell all of you at Harvard why I'm going to be an amazing lawyer," a blonde Kardashian can be heard saying while lounging in a pool in the video's opening moments. The video proceeds to then unfold exactly as the video admissions essay featured in Legally Blonde did except with Kardashian playing the part of Woods.

But aside from being a near perfect remake, Kardashian's Legally Blonde Halloween costume is also the perfect comeback to the haters who rolled their eyes at her efforts to become a lawyer. For those who may have forgotten, Kardashian revealed to Vogue in April that she'd begun a four-year law apprenticeship the previous summer with plans to take the California bar in 2022. According to the magazine, Kardashian said she'd been inspired to start studying law after working to help free Alice Marie Johnson in 2018.

"It's never one person who gets things done; it's always a collective of people, and I've always known my role, but I just felt like I wanted to be able to fight for people who have paid their dues to society," Kardashian told Vogue of working on Johnson's case. "I just felt like the system could be so different, and I wanted to fight to fix it, and if I knew more, I could do more."

On Thursday, however, it seemed as if Kardashian had silenced her haters with many, including a number of her sisters and even Witherspoon herself, praising her costume. "The best I've ever seen," Khloe Kardashian wrote in a comment left on the Instagram post in which Kardashian debuted her own version of Woods' Harvard admissions video.

"Elle Woods forever!" Witherspoon, who played the iconic character in all of the Legally Blonde films, wrote in an Instagram Story post sharing Kardashian's video.

In a separate post shared to Instagram on Thursday, Kardashian shared a few behind the scenes photos from her video shoot and closeup peeks at her various Elle Woods' outfits, proving each was fully thought out down to even the accessories and hairstyles. In fact, given Kardashian's attention to detail, I think even Woods would say her costume calls for a little "bend and snap."

More Like This
Can You Light Fireworks In Your Backyard?
20 Family-Friendly Movies To Watch With Your Kids On The 4th Of July
Bright & Festive Nails To Rock On July 4th
Festive Fourth of July Sparkler Crafts