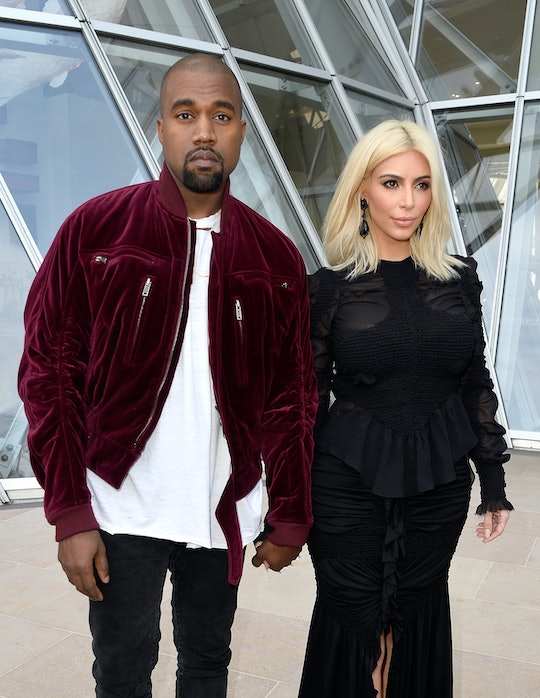 Kim Kardashian and Kanye West's new baby is finally here. On Friday, the reality TV star announced that their surrogate gave birth to the couple's fourth child, a son, and he already sounds perfect. And though she hasn't shared a photo yet, fans will be delighted to know that Kardashian did reveal her new baby looks like one of his siblings, so he's clearly already a cutie.

In a series of tweets on Friday, the mother of four shared some pretty exciting news with her fans — starting, of course, with the their baby has finally arrived. But hardcore Kardashian fans were already aware that this exciting announcement could be coming. During an appearance on The Ellen Show on Thursday night, Kourtney Kardashian surprised their mom, Kris Jenner (and host, Ellen DeGeneres) with news that Kardashian's surrogate was in labor at that very exact moment, according to BuzzFeed.

While Kardashian didn't reveal when he exactly was born, what they decided to name him, or how his three older siblings — 5-year-old sister, North, 3-year-old brother, Saint, and 1-year-old sister, Chicago — are feeling about his arrival, she did tweet that "he's here and he's perfect."

What's more, Kardashian revealed their baby is already taking after one of his siblings. In a follow-up tweet, she stated that their newborn looks exactly like their youngest daughter, Chicago. "I'm sure he will change a lot but now he looks just like her," she wrote.

Given how stinkin' adorable Chicago is, it sounds like Kimye's newest son will be just as cute (like it's even possible). But, fans will have to take her word for it for now because Kardashian has yet to share a photo of her newborn with her fans. But given how much she loves sharing things to social media, there is no doubt that people will be seeing him soon.

This little detail must also mean that their son looks like Kardashian did when she was a baby. This past October, she revealed that Chicago looks just like her and Saint, according to Us Weekly. "It's the two of us in her," she said.

Only time will tell if their little one also adopts Chicago's personality, too. In a series of tweets in December, Kardashian revealed that her daughter has been pretty easy going so far, according to People. "She LOVES food!" she wrote. "She has the best personality; very easy going and chill."

It sounds like everyone is so excited about the baby's arrival, especially North. During an appearance on Ashley Graham's podcast, Pretty Big Deal last year, Kardashian revealed that North was waiting for them to give her another little brother for some pretty funny reasons, according to Life & Style. "[North] said to me the other day, 'Mom, I have a great plan. We just need to have another baby brother so that Saint can just leave me alone. So the girls can be on this side of the house and the boys can be on that side of the house,'" she said.

Although it might be a while before that actually happens, it sounds like their newest addition is fitting in to their family quite nicely.