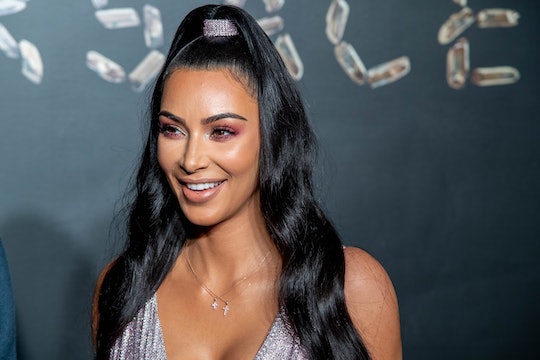 Kim Kardashian and her husband, Kanye West, welcomed their fourth child via surrogate in May, with the new arrival joining a cute clan that already includes North, 5, Chicago, 1, and Saint, 3. As it turns out, the fourth time is the true charm because Kim Kardashian's new photo with Psalm reveals he's the easiest baby ever.

Psalm, whose arrival Kardashian announced May 12, has been far from a difficult newborn. In fact, Kardashian told People that the whole diapers and feeding thing hasn't been as as challenging this time around.

"We celebrated our baby boy about a week ago [at the baby shower] and now he’s here! He’s so perfect!" Kardashian wrote on Instagram at the time of Psalm's arrival. "I was freaking out for nothing because he is the most calm and chill of all of my babies so far and everyone loves him so much."

As for the new post (which is seriously adorable, btw) Kardashian is seen cuddling her littlest guy, who's all fancied up in an orange two-piece outfit. The baby will turn four months shortly, and as some parents already know, the first three months of a baby's life can be a big adjustment. So it's pretty cool that Psalm is handling this whole baby thing like a total champ.

"My little man is the sweetest ever!" Kardashian captioned the sweet shoot. "He’s honestly the best baby. Sleeps through the night and by far my most calm. How did I get so lucky?"

This period, sometimes known as the 'fourth trimester," as pediatrician Dr. Harvey Karp's Happiest Baby blog confirmed, can be tough for both mothers and fathers. I can say for sure that while moms are dealing with the physical effects of labor, both moms and dads are handling what is, at least in the case of a first child, a sudden and total lifestyle change with the arrival of parenthood.

What's more? during this stage, a newborn isn't quite ready for the outside world, as Dr. Karp noted. Thus, many newborns need extensive shushing and swaddling to trigger a calming reflex, as he explained.

In my personal experience, these harrowing months can almost break a person. But sometimes parents report a totally different experience, finding that their babies are calm and easy. As for me, I can't say I've ever used the words "easy" and "new baby" together in one sentence.

Perhaps it's that Kardashian and West are such experienced parents that they knew what to expect, which is why these past few months weren't as hard. Or it's possible Psalm is an unusually angelic baby.

Not that Kardashian has been without struggles: Her past pregnancies resulted in so many complications that she turned to a gestational carrier for both for Chicago and Psalm, according to TODAY. And now, this mama-of-four will not only be juggling her business enterprises with a bigger than usual brood, but she plans to take the bar exam in 2022, according to People. Her goal is to contribute to the cause of criminal justice reform.

Hey, with all of that on her plate, I figure Kardashian deserves an exceptionally easy baby experience. She looks ecstatic to have all of these adorable little people in her life, and motherhood clearly agrees with her.

More Like This
Ryan Reynolds Was Asked If He's Excited To Be A Dad Of 4 & Obviously Cracked A Joke
Baby Growth Spurts: When They Happen & What To Expect
When To Stop Swaddling Your Baby: 8 Signs It’s Time To Transition
41 Strong & Sweet Baby Boy Names That Start With “K”