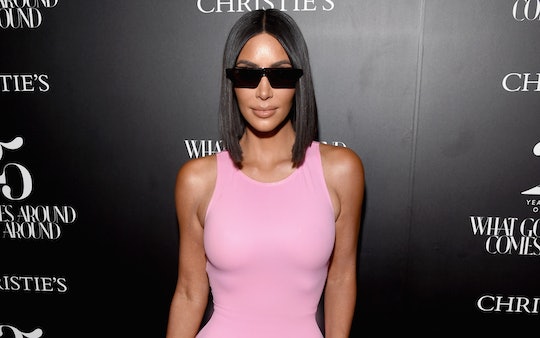 You Won't Believe How Kim Kardashian Puts Her Outfits Together

As a mom of a certain age who works from home, the criteria for my day-to-day look is pretty much no stains, minimal holes, can't see through it. Of course, my work-at-home job doesn't require me to post selfies and promote my husband's fashion line, so I guess that's why Kim Kardashian's process for putting outfits together is a little different than mine. Don't get me wrong, she doesn't leave the house covered in stains, either (although transparent fabric sure isn't a deal breaker for her). But the care she puts into creating the perfect ensemble is above and beyond what I — or really anyone — could possibly imagine.

Don't get me wrong, I do sometimes try to look nice. I might even pull out the full length mirror to check out my butt, or change a top if it doesn't work well with my jeans. But Kardashian has a staff for that. Yes, she's hired fit models. "We have gotten people who have my exact same measurements," the reality star told People. I'm honestly shocked that there's even one person on earth that has the exact same measurements as her, but apparently, when money's no object, you can find anything. "They try on all the clothes, photograph it, [and] do the fittings for hours every day of all the different Yeezy looks."

A fashion designer hiring fit models doesn't seem that strange, and it's understandable that Kanye West would want to ensure that his designs looked good on his wife before giving them final approval. But Kardashian doesn't dress exclusively in Yeezy wear, so she also borrowed her doppelgängers for personal use, she explained to People. "At one point I sent over my entire closet to my husband's office. I had full time security because I was so nervous." Completely understandable. If I lost all the clothing in my closet, it would cost tens of dollars to replace. I'd be devastated. I wonder if that's covered by homeowner's insurance.

But Kardashian doesn't just farm out trying on her clothing; she also hired a team to select the outfits. "There were all these stylists using my clothes, taking pictures and then sending it to me," she continued. "They make my life so easy!" What a time saver. I guess if you have enough clothing to stock a very large boutique, it's understandable that it would take a while to sift through everything.

Kardashian called her system "a modern version of Clueless," which I disagree with wholeheartedly. In the Gen-X version of Mean Girls, protagonist Cher Horowitz (Alicia Silverstone, who now plays the mom in Diary of a Wimpy Kid) used a '90s computer program to match her outfits, and had a friend take Polaroid photographs of her wearing them, because she didn't trust mirrors. The modern version of that would be a selfie and some simple photo editing software, not hired help. But anyway...

Here's where Kardashian really loses me: after a team of servants assembles the outfits, drapes them over humans who are shaped exactly like her , and then sends her photographs (no doubt taken by yet another professional or three), you'd think her work is done. All she has to do is flip through a binder or scroll through a digital album, grab the coordinating pieces, and she's good to go. Nope! As she told People, after going through that whole process and picking out a look she likes, "I'll try it on and make sure it looks good on me." Girl! Why are you hiring women with your body to try on your clothes if you're just going to try them on yourself, anyway? Couldn't the stylists have just used mannequins or hangers or laid everything out on the floor? We sure do live in different worlds. And I'm not complaining.