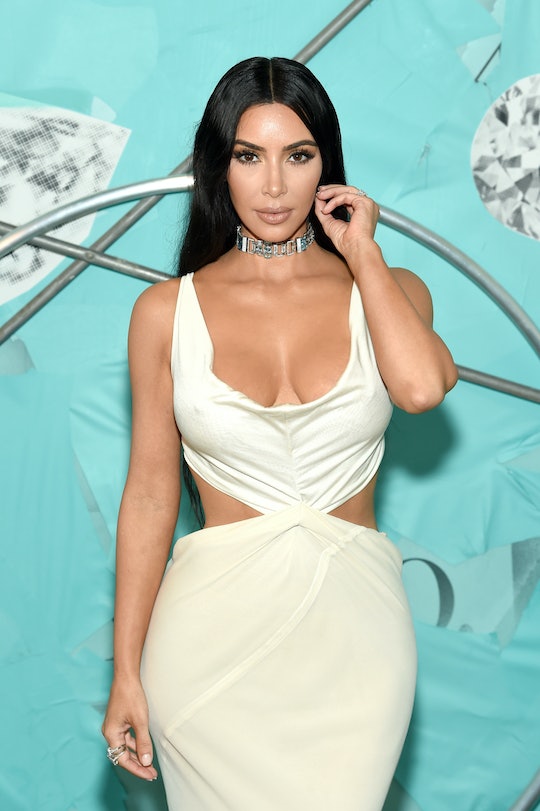 Here's Everything Kim Kardashian Has Said About Using A Surrogate

Rumors and reports are circulating right now that Kim Kardashian and Kanye West are expecting their fourth child. As with their youngest, Chicago, the couple is reportedly using a surrogate. And while they are undoubtedly ecstatic, though they have yet to comment on the latest reports, Kim Kardashian's quotes about using a surrogate for her third pregnancy show that it is an emotionally complex experience and far from the "easy way out" that some critics claim it to be.

As you may recall, Kimye opted for a surrogate pregnancy for their third child after Kardashian suffered a painful and traumatic delivery with both North and Saint West. She had placenta accreta during her two deliveries, which she explained in detail during an interview with Elle. "After giving birth, your placenta is supposed to come out. But mine was stuck," she said. "That’s what women usually die from in childbirth — you hemorrhage and bleed to death and they can’t stop it." And while it didn't come to that for Kardashian, she was told that any future pregnancies could put her life at risk.

Her surrogate successfully carried Chicago, delivering her into the arms of her parents last January. And the rumor of her being pregnant again were circulating as early as August. And while Kardashian denied the rumors at the time, as Harper's Bazaar reported, sources have since reportedly told Us Weekly and People that she and West are, indeed, expecting yet again via surrogacy. As of yet, Kardashian hasn't spoken publicly about the reported pregnancy or her expected baby boy, but her past quotes about using a surrogate shed some light on how she may be feeling.

On The Lack Of Control

As stressful and frustrating as it can be to limit your diet and attend endless prenatal checkups, these steps give you a sense of control as your baby grows. But, as Kardashian pointed out in an interview with Elle, expectant mothers using a surrogate have to let go of that control:

I hated being pregnant. But as much as I hated it, I still wished I could have done it on my own. The control is hard at the beginning. Once you let that go, it’s the best experience. I would recommend surrogacy for anybody.

On Surrogacy Being "Easy"

It's easy to pass judgement from the outside, and many of Kardashian's critics accused her of taking "the easy way out" when it came to her pregnancy with Chicago. But if you think that is true, she has a message for you, as she shared with Entertainment Tonight:

Anyone that says or thinks it is just the easy way out is just completely wrong. I think it is so much harder to go through it this way, because you are not really in control. I thought this was going to be so easy, but you know, even in how much I hated it, if I could do it myself I would have preferred that. So, that inner struggle is kind of hard, but I am just rolling with it and it is what it is.

On Loving Her Choice

While Kardashian had mixed feelings about using a surrogate in the beginning, she doesn't regret the decision — far from it, in fact. As she explained on an episode of Keeping Up With The Kardashians, it was the right move for her:

Honestly, [now that] it's done, I think it was the best decision I ever made. I think it was so an amazing experience. I would recommend it for anyone. I am like, the biggest fan of surrogacy.

On Connecting With Her Baby

During the same episode, Kardashian opened up about her fears over connecting with Chicago in the same way that she did with her other children. But the bond was definitely still there:

It's crazy how ... instantly when the baby came out, there was no weird feeling that I was so nervous about, [like] "am I gonna feel the same way?" It was the same exact feeling [as with the other kids]. That was instantly a relief for me, because that's what I was most nervous about, and I just feel lucky that I've had such a good experience with surrogacy.

Bringing a child into the world is never easy, whether you are able to carry the baby yourself or not. The path to motherhood is an emotional one, and surrogacy only adds to it. Kardashian has shown that she loves her babies immensely, regardless of how they came into the world. And she will soon have one more baby to love on.

More Like This
Jason Ritter's Family Cannot Appreciate His Culinary Talents
What Is Acid Reflux Tape? Chrissy Teigen Swears By It
Kate Middleton's First Tiara Moment As The Princess Of Wales Honored Princess Diana
Ryan Reynolds Jokes He "Should Sweep Or Something" To Get Prepped For Baby #4