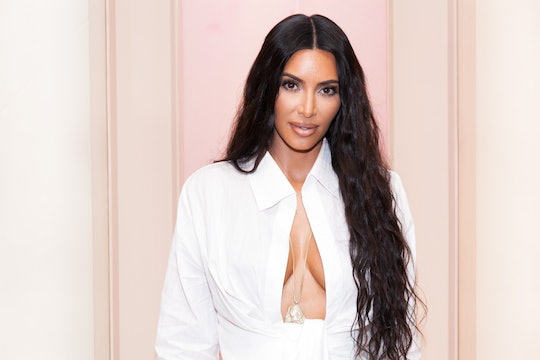 Kim Kardashian's bond with her four kids is unlike any other. Her relationship with each of them is so special and unique and it shows, especially in every single photo that she posts with them. It's obvious that Kim Kardashian's selfie with North is filled with love — her little girl is growing up and Kardashian could not be any more scared (or excited).

Kardashian could be having a hard time coming to terms with the fact that her little girl is not so little any more. Over the weekend, Kardashian shared the sweetest photo of her and her oldest child, North, to Instagram. In the photo, North can be seen clutching a stuffed animal, smiling sweetly in to the camera while Kardashian smiles widely for the camera with her arm around her daughter. It's an adorable selfie caught on camera and a look at their normal life at home. But Kardashian's caption makes the photo all the more special and sweet. "I still can't believe my first born baby is six," Kardashian wrote.

Neither can her fans. It's very hard to believe that North turned six years old on June 15, according to People. Time moves so quickly and its obvious from the photo that North gets a little older each and every day.

Kardashian's followers can't believe her little girl is getting so big, too.

"So cute!!," another commenter added.

"Time flies. Memories stay," another commenter (wisely) wrote. "So much more to come."

They're so right. Although this might be a sad moment for her, Kardashian has so much to look forward to in North's life that is still to come. North still has to go through so many fun and important moments in a young girl's life — and Kardashian gets to be there alongside her, every single step of the way. That is one of the best parts about being a parent.

And if Kardashian hates this now, she's going to have to get used to it. North's three younger siblings — 4-year-old brother, Saint, 1-year-old sister, Chicago, and infant brother, Psalm — are going to grow up fast, just like her. And it's not going to get any easier for Kardashian to watch them grow.

But, it's easy to understand why Kardashian is having such a hard time letting go. After all, North is her first born child, which means that Kardashian has experienced all of her firsts with her. North has been her first child to express her opinions (she doesn't really like her younger brother, according to Us Weekly), to push her mom's boundaries, and to show an interest in expressing herself. Kardashian practically learned how to be a mom thanks to North, and now North is practically her own little person now.

In 2017, Kardashian spoke highly of North's super smart personality during an appearance on The Ellen Degeneres Show, saying she is just like her dad, Kanye West, which means she's pretty independent, too. "She's really, really, smart actually," Kardashian said, according to People. "She knows how to outsmart us — or she thinks she does. But she is Kanye's twin. Same personality, says the same wild things. Those two..."

The best thing about this is that fans have been there for every single part of North's journey. They've seen her grow so much and know that this is only the beginning — and Kardashian definitely sees that, too.