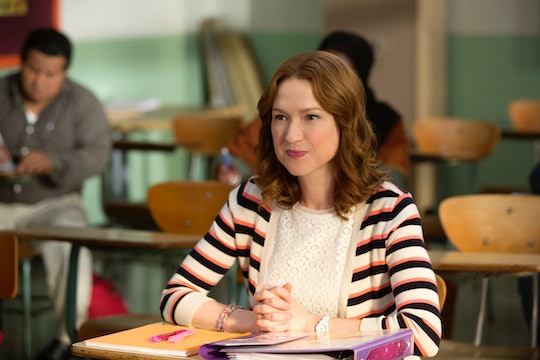 Kimmy & Dong Should End Up Together On 'Unbreakable Kimmy Schmidt,' They Deserve It

After she left the bunker where she was imprisoned for 15 years, Unbreakable Kimmy Schmidt's titular heroine had to figure out just what she wanted from her life. Kimmy had to adjust to the real world again, which included finding a job, going back to school, and potentially starting a relationship. She's had flirtations with a few different people over the course of the show, but the one that became the most serious was with her GED prep classmate Dong, played by Ki Hong Lee. Not only were Kimmy and Dong totally adorable together, they really seemed to get each other. It wasn't easy for the burgeoning couple, but despite the setbacks, there are plenty of reasons why Kimmy Schmidt and Dong should end up together.

The first season ended with Dong panicking as he faced deportation back to Vietnam and choosing to get married to remain in the country. He got hitched to another one of their classmates, a much older woman named Sonya, who he definitely doesn't have feelings for — and who is more than a little peculiar. While that initially seemed like it might be the end for Dong and Kimmy, he comes into her life once again in the series' second season. Unfortunately, things aren't much easier for the couple. Dong has his marriage to maintain for a couple of years and Kimmy has to make peace with moving on.

Watching Kimmy give up all hope of a future with Dong is heartbreaking, and it's just as awful to see Dong do the same. He's in a tougher spot than Kimmy because he's forced to deny himself what he wants in the present so he can maybe have it in the future, but to stay in the country than that's what he has to do. Plus, he's pretty much perfect for Kimmy.

Kimmy and Dong are both outsiders in New York City, and the journey to figure out the city (and their place in it) is one that they can take together. Their personalities are compatible too; both of them are innocent and sweet, even a little naive, and they can appreciate the little things in life more than most. It's the exact kind of romance Kimmy deserves after a life filled with so much struggle and denied of so much joy. Dong is smart, funny, kind, and he genuinely cares about Kimmy. Remember that time he made her a bike?

Kimmy and Dong might not be able to be together now, but one of the greatest things about this show is its emphasis on the importance of hope to get you through, say, the next ten seconds. So here's hoping.