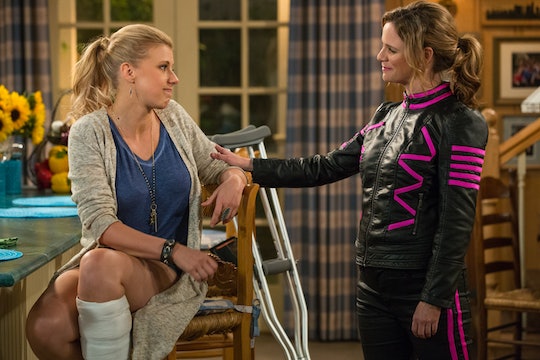 Warning: Season 3 spoilers ahead! Stephanie Tanner and Kimmy Gibbler have been a major part of each other's lives for quite some time now. But the truth is, I never really considered either of them to be friends until Fuller House came along. Steph used to simply tolerate Kimmy. Now she can't imagine life without her. The growth in their friendship has been so heartwarming, but nothing showcased this better than when Kimmy offered to be Stephanie's surrogate on Fuller House, right in the middle of the third season. That, for me, is when these two former frenemies became ultimate life-long pals.

Stephanie revealed back in Season 1 that she's unable to have kids on her own, but after visiting a fertility doctor in Season 3, she learned that she still has a few viable eggs left. This prompted her and Jimmy to look into the in vitro fertilization (IVF) process, which could allow them to have a biological child by means of a surrogate. And while surrogacy is becoming more and more common (one in eight couples have trouble conceiving, according to the 2006-2010 National Survey of Family Growth, CDC), finding the right match for you can be difficult — that is, unless you have a friend like Kimmy Gibbler by your side.

As soon as Kimmy learned about Stephanie's struggles about finding surrogate, she immediately offered up her services. Sure, her gesture was continuously peppered with a vast array of jokes (she loved calling her and Steph "womb-mates"), but the sentimentality of what she was doing also shined through loud and clear.

Kimmy knows how much Stephanie wants to be a mom and wants to do everything she can to make that happen for her. That is such a selfless thing to do for someone and I honestly never thought it would be happening between these two characters, of all people.

Getting pregnant means offering up your body to a wide variety of changes (not to mention the very painful part that comes at the end of nine months). The fact that Kimmy didn't even hesitate to do this for Steph is a testament to how far they've come in their relationship. On Full House, I felt like Steph always viewed Kimmy as her sister D.J.'s best friend. But now, it's become more clear than ever that she views her as a sister.

Things got off to a rocky start with Kimmy growing more and more concerned that she wasn't pregnant due to her usual lack of morning sickness. But after a visit to the doctor in Episode 18, she was able to confirm that there is indeed a "baby on board" the Gibbler express. Steph and Jimmy could not be more thrilled and I'm eager to see how this dynamic plays out as Kimmy's pregnancy continues on into Season 4. (Which, there's definitely going to be a fourth season, right?) Plus, I can't help but love how this storyline has a very familiar ring to it in the sense that this isn't the only sitcom that had a character become pregnant with her brother's baby... or should I say babies.

As of now, it seems that there's only one baby growing inside of Kimmy right now. But hey, you never know. Nicky and Alex made for an adorable pair on the show. I certainly wouldn't be opposed to welcoming twins or even triplets into this already full house. And it'll all be thanks to the friendship no one ever saw coming — least of all them.