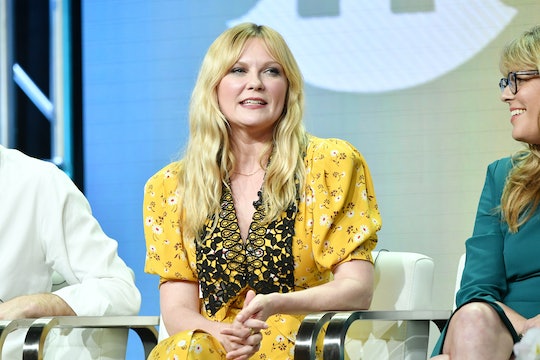 Kirsten Dunst Hasn't Worked Out Since Giving Birth, & It's So Refreshing

The pressure to "bounce back" after pregnancy and childbirth can be intense — especially for celebrities. Even though a woman spent the better part of a year growing an entire human being and then pushing that human being out of their nether region, she's supposed to instantly look like it never happened. Nope. No stretch marks, no cellulite — only rock-hard abs. Well, it turns out Kirsten Dunst hasn't worked out since giving birth. And clearly her priorities are in order.

If you haven't kept up with the actress in recent years, Dunst welcomed a baby boy named Ennis with her fiance, Jesse Plemons, in May 2018. Dunst took on the role of Krystal Stubbs — as well as an executive producer — in On Becoming a God in Central Florida just five months after giving birth. During a recent interview, the busy mom opened up about her postpartum body. And honestly, it's refreshing AF.

“The benefit of growing up with celebrity is that I have a very healthy perspective of being an actress," Dunst told Net-a-Porter. "I haven’t worked out once since I had my baby. I’m not one of those people who says, ‘Ohhh I have to get my abs back. I feel like I’ve established myself as an actress. I have a healthy amount of vanity that hasn’t tipped into something really destructive. I want to find parts where I don’t have to be that person, and I have plenty of role models. Look at Patricia Arquette.”

This isn't to say there haven't been moments of internal freakout because her postpartum clothes didn't fit. However, Dunst's outlook on it all is admirable. She explained:

I want to look nice for how I look now. There was a time when I was like, ‘Shit! I don’t fit into anything anymore.’ I just bought clothes in the size I am now. I don’t care.

In other recent Kirsten-Dunst-is-the-celeb-mom-I-never-knew-I-needed news, the actress has also opened up about working motherhood, according to People. "I'm just tired all the time," she said at the Television Critics Association Summer 2019 Press Tour. "Also doing the show too, it’s so much easier to go back to work than it is to be a stay at home mom. I was like, ‘bye’ to my mother-in-law. I was like, phew!”

For me, Dunst totally nailed it with the "tired all the time" bit. (And I have a feeling most other moms can relate.) I'm not quite as convinced about the part about working motherhood being easier, though. Having worked outside of the home and from home, both have their rough patches — just in different ways.

But back to postpartum bodies. Kudos to Kristen Dunst for now bowing to societal pressure to lose the baby weight ASAP, and by any means possible. Her outlook is definitely refreshing in light of celebrities showing off mirror selfies of their chiseled abs two months after giving birth. That much I can say.

However, this isn't to say that moms who do manage lose their baby weight quickly — whether it's because of genetics or hard work at the gym — don't have their priorities in order. Running was something that made me feel like an actual person again having having each of my babies. (Instead of just a breastfeeding, butt-wiping zombie.) Between that and breastfeeding, I was able to shed the baby weight relatively quickly.

The bottom line: You do you, mama. Lose that baby weight at your own pace — and screw society's unrealistic expectations for what a new mom's body is supposed to look like.

More Like This
Here’s Why You Get Cramps While Breastfeeding
Dr. Jill Biden Just Delivered Some Frank, But Powerful, Advice On Motherhood
Kristin Bell Shared Some Sweet, Rare Photos Of Her Daughters From A Family Vacation
Jennifer Lopez Took Emme & Ben Affleck’s Daughter Violet To See Into The Woods