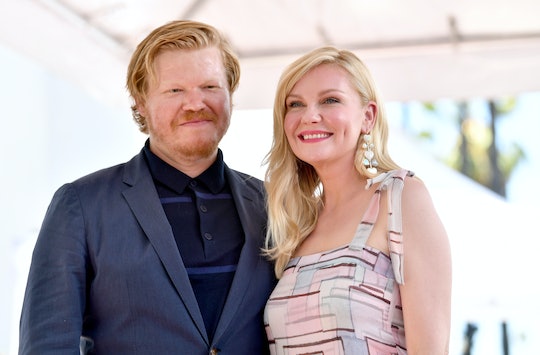 The Meaning Behind Kirsten Dunst's Son's Name Is Surprisingly Simple

Just one year after welcoming their first child together, Kirsten Dunst and her fiancé, Jesse Plemons, are now opening up about their first child together. In May 2018, Dunst gave birth to their son, Ennis, and is slowly sharing more details about him. In a new interview, Kirsten Dunst revealed the meaning behind her son's name, and some people might be surprised to learn that the meaning is not that deep.

Dunst and Plemons are notorious for keeping their son and his life private. But over the course of the past few months, Dunst has slowly revealed more and more about Ennis, which could not be any more exciting. Late last month, the family of three made their first public appearance together at Dunst's Hollywood Walk of Fame ceremony. And now, Dunst is revealing how she and Plemons came up with Ennis' name.

After welcoming their son in May 2018, it was revealed around the same time that the couple named their son Ennis Howard Plemons. And during an appearance on Jimmy Kimmel Live! Dunst shared with host Jimmy Kimmel how they came to pick it.

"We found it online," she said. "You know those baby websites where you just keep scrolling? We were like, 'We like that!'."

It's that simple. She and Plemons simply liked the way it sounded and went with it, which is awesome. Sometimes, names don't have to have a deeper meaning to the couple or be rooted in decades of family history. Instead, they can be chosen just because the parents love the way it sounds on their child. Expecting parents know how much fun looking through these baby naming websites can be, especially when they're stuck on a name or two.

Dunst added that she thinks the name sounds like "an old cowboy name." And although the name wasn't picked out for any particular reason, Dunst noted that there is a town in Texas (the state where her fiancé is from) named Ennis, which is a super cute homage to his upbringing.

Ennis is a traditional boy name with Irish origins, according to Name Berry, meaning "from the island." The name is pretty rare these days, according to The Bump, but is slowly growing in popularity thanks in part to Plemons and Dunst for putting it out there.

The perfect name is hard to come by and Ennis' name so perfectly suits him. Just look at how sweet he looked at Dunst's Hollywood Walk of Fame ceremony last month.

In spite of Ennis making a public appearance recently and having fans know how his name came to be, it's not likely that Dunst will be sharing much more revealing information about him. In a recent interview with BUILD Series on YouTube, Dunst stated that she won't be posting photos of Ennis to Instagram, at all. "I come from an old school mentality where you don't want to give too much away, because it kind of ruins the mystique of people playing roles," she said. "And also, do you really want to see my kid?"

There you have it. In case fans were dying to know, it's now confirmed that Ennis' name has no personal meaning to it and Dunst might not share too much more about him for a while. But at least fans have these bits of information to hold on to.