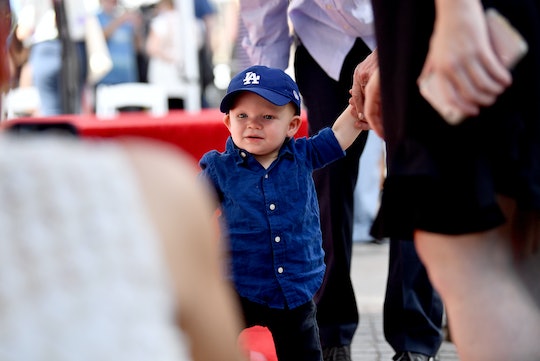 Kirsten Dunst Has Finally Confirmed What We Already Knew: Her Son Is ADORABLE

Kirsten Dunst celebrated a major moment when she received a star on the Hollywood Walk of Fame on Thursday, Aug. 29. And naturally, her entire family there to celebrate with her, including her 1-year-old son. Yes, this means that Kirsten Dunst's son Ennis made his first appearance on the red carpet alongside his parents at the event, and he's just as adorable as her fans expected. I mean, how could he not be cute?

Dunst finally received a star for her long time career in movies, and was supported by her family members, including one that fans have never seen before. Her fiancé, actor, Jesse Plemons, and their 1-year-old son, Ennis, were there to join her on the red carpet, as well as her parents and brother, according to AOL. Dunst gave birth on May 3, 2018, according to Harper's Bazaar, but has made sure that her son has maintained a level of privacy since. She hasn't shared a photo of him to her Instagram account, and did not make a red carpet appearance with him until Thursday.

But since getting a star on the Hollywood Walk of Fame is a huge deal, it's only right that Ennis was there to support his mom. In photos from the event, Ennis can be seen being accompanied by Dunst's dad while sitting on top of her star. He could not be any cuter, and is pretty much the perfect combination of Dunst and Plemons.

While people are so delighted to know what Ennis looks like, they shouldn't get used to it. Her decision to keep him private has been deliberate. In a recent interview with BUILD Series, Dunst said that she won't be posting photos of him to her Instagram account any time soon.

"I come from an old school mentality where you don't want to give too much away, because it kind of ruins the mystique of people playing roles," she said. "And also, do you really want to see my kid? I don't know. What if my kid grows up and they're like 'I hate you, mom. Why'd you put me all over Instagram?'"

"Kids find any reason to hate their parents," she added. "Let's just avoid all of things you can."

Dunst's decision is one that fans have to respect, especially since it revolves around her relationship with her son. But that isn't to say that they can't enjoy seeing him for the first time, especially since she has made it clear that this will be a rarity.

Although people might want to see more of her son, Dunst recently told Net-A-Porter Magazine that she isn't going to force him into acting, even if he is such a cute baby. "If you have a kid who's very cute, I get why people do it," she said. "Do a Gap ad and make your college money. It's the first time, I kind of understand it."

"Ennis is so adorable, with two big dimples," she added. "He is such a happy baby and I see why I might want a memento of him at this age. But we will probably encourage him to do school plays."

Ennis' dimples are just as adorable as Dunst has made them out to be. Although fans of the couple had to wait a while to see their little boy, it was well worth the wait.