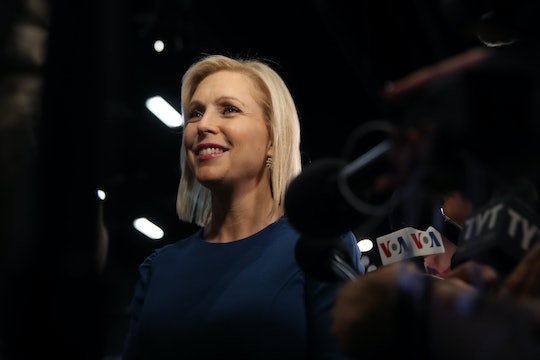 On May 13, 2008, then-Congresswoman Kirsten Gillibrand sat through a 13-hour hearing in the Armed Services Committee. The following day, she gave birth to her second son, Henry. When the news of her son's arrival was announced in Congress, Gillibrand's colleagues gave her a standing ovation on the House floor; the same Congress that has failed to pass a bill mandating paid family leave, that didn't allow babies on the floor of the Senate until just last year (Sen. Orinn Hatch at the time: "But what if there are 10 babies on the floor of the Senate?"), and that allowed the children's health insurance program to lapse in 2017.

There's a metaphor in there somewhere.

"How many mothers over-perform right up until pregnancy?" Gillibrand tells Romper, downplaying the notion that it is cruel and unusual to hope your water doesn't break at work. "It's kind of that nesting instinct."

Gillibrand, who became the youngest U.S. Senator in 2009 after filling the vacant seat left by New York senator Hillary Clinton when she was appointed Secretary of State, is a typical U.S. mother in working up until labor and delivery. A reported 66 percent of mothers who gave birth to their first child between 2006 and 2008 worked during their pregnancies, according to the Pew Research Center. Of those 66 percent, 82 percent worked within one month of giving birth. In other countries, like India and France, maternity leave includes guaranteed paid time off prior to birth. In India, an expectant mom can take up to 26 weeks paid leave in total, and is allowed to use up to eight weeks prior to her due date. In France, generally six in the leadup to birth.

While many pregnant people report experiencing a surge of energy prior to going into labor, working 13 consecutive hours less than a day before you experience childbirth is less a bi-product of so-called "nesting," and more a symptom of inadequate parental support.

"I can find common ground with any mother in America," Gillibrand is telling the crowd at a town hall hosted by Romper's sister site Mic.com, as she outlines her plan to create a family bill of rights and repeatedly calls out her position as an "extremely privileged" white woman. She is firing on all feminist cylinders, standing to answer every question, while the host, Mic's Jake Horowitz, gazes up from his low velvet armchair. "There is absolutely a double standard" in how female politicians are treated, she tells Horowitz when asked about her role in assembling a Democratic posse to oust Al Franken. "It’s outrageous! It’s absurd!"

That double standard is something Gillibrand is all too familiar with. After Henry was born, her then-spokeswoman told The Daily Gazette, "Fortunately, the congresswoman rents a little townhouse apartment close to Capitol Hill. She’s going to work very hard to make many of the important bills.” And in 2014, in an interview with People that leaked to The New York Post, Gillibrand recalled instances in which her male colleagues made derogatory comments about her postpartum body. "You know, Kirsten, you're even pretty when you're fat," one unidentified Southern Congressman told her. "Good thing you're working out, because you wouldn't want to get porky," another said in the House gym.

Ahead of the 2020 election, family services are high on the senator's list. "I am the only candidate that laid out a comprehensive approach to a family bill of rights," Gillibrand tells Romper. "It has five components. The first is that we should have the right to a healthy — and [to] survive — a healthy pregnancy. So that means making sure that we deal with maternal mortality directly." Currently, the United States is the only developed nation with a rising maternal mortality rate, and Black women are three to four times more likely to die from pregnancy, and birth-related complications than white women, as she points out. (In some states, like New York, they're 12 times more likely to die, per ProPublica.)

"Maternal mortality exists because doctors don’t believe women when they say something is wrong," Gillibrand says; an issue exacerbated by racial bias within the health care system. A 2016 study published in the Proceedings of the National Academy of Sciences found that nearly half of the white medical students and residents at the University of Virginia believed Black people have "less sensitive" nerve endings. And a 2007 study published in the Journal of National Medical Association found that doctors were more likely to downplay pain experienced by Black people. "It’s not the responsibility of Black and Brown women to fight these fights alone," Gillibrand says. "It's my responsibility to fight alongside them."

To address the nation's shameful maternal mortality rate, Gillibrand plans to fix the OB-GYN shortage in rural areas by making it "easier and cheaper to train new OB-GYNs." She also plans to study maternal health data from these rural areas, and help expand and advance training for OB-GYNs in rural health centers, as well as get a trauma kit in every delivery room to treat excessive bleeding.

She also sees her family bill of rights as encompassing access to reproductive services. "It means those who want to be pregnant or want to have children have access," she tells Romper. "It means allowing LGBTQ couples adopt and [ending] discrimination against them. It means allowing those who have infertility to have access to coverage for infertility treatments in all insurance plans and certainly under a Medicare for all plan." Currently, 10 states allow state-licensed welfare agencies to refuse to place children with LGBTQ parents if it "conflicts with the agencies' religious or moral beliefs," according to the Movement Advancement Project. She would also "make sure that low-income families who can’t afford to adopt can get tax credits so they can actually afford to have a child," she tells Romper.

But Gillibrand has proposed a paid family leave bill every year between 2014 and 2019, and the same Congress that gave her a standing ovation for having a child has failed to pass those proposals.

Sen. Gillibrand would like to import baby boxes. "So, baby bundles — it’s been done in about five states and other countries," Gillibrand tells Romper, referring to Finland's baby box as a model. "You send home a box and the box can be used as a crib."

Gillibrand says the box would contain a swaddling cloth, formula, thermometers, and other items that will ensure a child is more likely to survive that first month of infancy than not. Finland has one of the lowest infant mortality rates in the world. Gillibrand wants to ensure that all parents, regardless of their income, are provided a baby bundle after the birth of a child or children.

Gillibrand also plans to pass a paid family leave policy, affordable daycare, and universal pre-k, all within the first 100 days of her presidency. She wants parents to have "a moment with their child before they have to go back to work, so having national paid leave is a priority." The United States is the only developed nation without a paid family leave policy, and a reported 8 in 10 voters support a comprehensive national paid family and medical leave policy, according to a 2018 national survey of 1,004 voters Commissioned by the National Partnership for Women & Families. But Gillibrand has proposed a paid family leave bill every year between 2014 and 2019, and the same Congress that gave her a standing ovation for having a child has failed to pass those proposals.

Still, the senator's paid family leave for new parents, caregivers, and people who are ill is supported by every other Democratic candidates for president. It would pay out 66 percent of a worker's salary, capped at $4,000 a month per person, and would be paid for by a 0.02 percent tax on a worker's wages, which is then split between the worker and their employer.

"The only time our democracy works is when people stand up and demand it," Gillibrand tells the town hall, ramping up to The Ask. "You need someone who will fight as hard as they would for their own children."

Gillibrand sounds eager for that fight, but she hasn't always been leading the charge on issues that matter to families. "We should all be able to take our kids to the park without worrying about them being shot," she says, though Gillibrand used to have an "A" ranking from the National Rifle Association (NRA) — the result of her voting in step with the NRA on gun-related legislation. After she was appointed senator, she claimed she slept with "guns under her pillows" and spoke about her annual family hunting trips.

Today, Gillibrand says she's embarrassed. She also says her so-called "flip flop" on gun issues is a sign that she's willing to listen to her constituents. She asks the crowd if they want a president like Donald Trump, who is unwilling to admit when he has made a mistake, or if they want someone like her: someone who listens to the mothers who have buried their children as the result of gun violence, and evolves her positions to better suit her community.

And it is, in fact, change she is promising the town hall crowd, as she ends the night with a forceful recap of her vision as president and a request for donations. The underlying premise of her promises and proposals is that when you have a chance to fix a system that is broken for millions of Americans, you don't stop for anything — including labor pains. You maybe even put other people's kids ahead of your own.

More Like This
Jacinda Ardern No Longer Has “Enough In The Tank” & Moms Know Exactly What She Means
We Ranked The Best (& Worst) Games Our Kids Learned From 'Bluey' — You're Welcome
When Does A Baby Recognize Their Father? A Pediatrician Explains
Marie Kondo Gives Up Tidying Post-Kids, Sparking Joy For Moms Everywhere
What Parents Are Talking About — Delivered Straight To Your Inbox