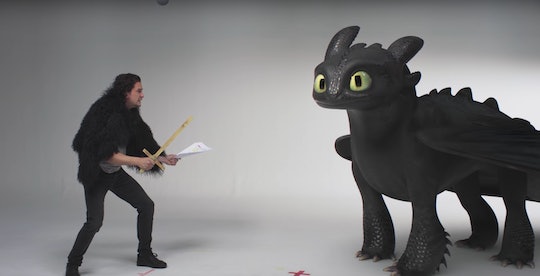 Games of Thrones' Jon Snow is taking on a whole new breed of dragons, namely, the adorable kind. DreamWorks Animation released Kit Harington auditioning for How to Train Your Dragon with Toothless and, honestly, the pair will steal your heart. The "audition tape" is only about two minutes long, so you can watch it on repeat, as many times as you want, and I promise not to judge you. I may have watched it on a loop for while before tearing myself away to write this article.

The sketch shows Harington, who plays Jon Snow on Game of Thrones, auditioning for a part in an "untitled fantasy TV drama" with a winged costar. Along with being hilariously adorable, the clip serves as a promotion for the upcoming third installment of the How to Train Your Dragon film, How to Train Your Dragon: The Hidden World, which is set to release in February 2019. This third film brings the return of Hiccup and his pet dragon, Toothless, who stars in the sketch alongside Harington.

Throughout the course of the first two movies, Hiccup and Toothless have brought peace between Vikings and dragons; showing the people of Hiccup's village how to train dragons in a loving, nonviolent way. Harington does little to tame Toothless during his time on screen with the big beast, instead the two come across more as friends and it's probably one of the cutest things you'll see all day.

As Jon Snow, Harington has an impressive interaction with one of Daenerys Targaryen's dragons, Drogon. When Drogon approaches Snow and allows him to pet him, Snow's status as a Targaryen is confirmed. But when Harington tries the same move with Toothless, the black dragon sneezes all over his outstretched hand. Confirming instead that he is the cutest dragon I've ever seen, Puff the Magic Dragon not withstanding.

And when Harington tries his hardest to display the serious persona that shines through in Game of Thrones, Toothless is persistently clumsy and eats the set — as dragons are known to do. But Harington is in on the laughs, too, making light of Snow's brooding persona. "Be honest," he says to Toothless in the skit. "Do I come across as too broody? 'Cause half the time, I'm just trying to remember where I left my keys."

That's not the only heavy-handed reference to Jon Snow, though. He also alludes to Snow's ambiguous background, according to TIME. "I’m a little confused about my part really. I mean first I’m dead, then I’m not,” he says. “No one knows who my mother is.”

Like How to Train Your Dragon, Game of Thrones is set to return in 2019. The final season of the show will premiere in April and include only six episodes. It is set to be gut-wrenching, by all reports. Harington's costar, Gwendoline Christie, told E! News in a recent interview that fans of the show are going to "need therapy." And when a reporter asked if "someone dies," Christie said:

I think just the show ending is going to send all of the world into professional help … I think it’s going to make me incredibly emotional. We’re all emotional about the fact that this is the end, and this is the end of something incredibly significant for all of us, and it’s been a truly incredible thing to be a part of.

Despite the emotionally charged series finale, Harington seems to be more than capable of keeping things light. His "audition" isn't going to cause you to need therapy, unless you consider cuteness overload a problem. In that case, you will definitely need to schedule some couch time with a shrink.

More Like This
Kaavia James Stole The Show At Disney’s Strange World Premiere
Ryan Reynolds' Daughters Have Watched 'Elf' Thousands Of Times, Just Like The Rest Of Us
HelloFresh Is Releasing Spaghetti Meal Kits Inspired By Buddy The Elf
All The Nights The Grinch Airs On TV In 2022