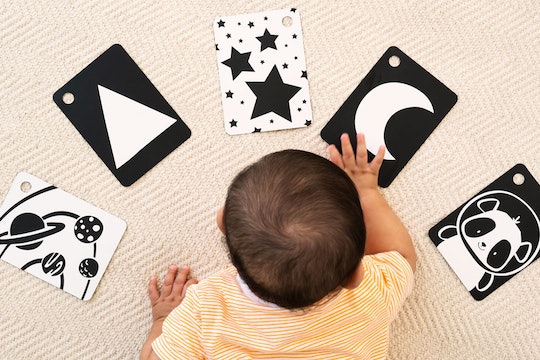 KiwiCo Now Has A Panda Crate For Babies & Toddlers, & It's Too Perfect

Buying toys for babies is not as fun as you would think. In reality, most babies end up more interested in the packaging than the actual toy, so it feels like you've wasted money and effort. Popular subscription box service KiwiCo noticed parents struggling and began designing a toy crate made just for little ones that are developmentally appropriate and engaging. KiwiCo's new subscription box for babies and toddlers, Panda Crate, is innovative, educational, and most importantly, entertaining for even the youngest minds.

KiwiCo joined forces with Seattle Children's Hospital to curate the perfect boxes of toys for each stage of your child's development. Beginning with newborns, and going all the way to 2 years old, boxes focus on milestones such as bonding, counting, sorting, and simple puzzles. Like all of KiwiCo's crates, each box comes with one toy, activity cards that explore how to use the products in the crate, one copy of Wonder Magazine, and a set of "Beyond the Box" cards that give ideas of other developmentally appropriate activity ideas for your child.

KiwiCo stated on their website that each toy is rigorously tested for safety and to promote engagement. A portion of each purchase goes to fund research in childhood education.

There was nothing like this Panda Box from KiwiCo when I had my children, and I spent a ton of money on toys that they never even looked at. Whether it was an obscenely-priced mobile or fancy kick and play toy, they mostly just liked the tags and boxes. I was never quite certain what it was that I should be buying, or what was developmentally appropriate. Sure, most stores had the toys separated by age, and a litany of descriptions for each toy, but I always felt like I had to take their advice with a healthy grain of salt, because it felt so disingenuous.

With KiwiCo's partnership with the Seattle Children's Hospital, it feels like KiwiCo's new subscription box for babies is actually going to deliver on its promises of keeping your toddler active and engaged with the toys. Seattle Children's is one of the country's leading research hospitals, and their expertise in invaluable. Each box is separated into five different age groups: birth to 2 months, 3 to 6 months, 7 to 12 months, 13 to 18 months, and 19 to 24 months.

If you've been a parent, you know just how much your baby changes between each of these stages. It's so much different than the succeeding years, where the changes take longer to develop, and toys hold a child's attention for longer spans of time.

These toys look simple on the surface, but really, they're working on the long game for your baby. Some of them are just brightly colored pillows or a soft thing to hold that promotes bonding between you and your baby. Maybe it's a stacking toy, but designed to be particularly visually arresting to an 18-month-old. The research that went into these toys show that KiwiCo really wants your child to dig in and learn with their toys, much in the same way they have done with their other boxes.

Because once your child turns 2, their subscription doesn't have to end. KiwiCo has a subscription box for every age, focused on what will interest them. The Koala Box features imaginative play toys like doctor's kits, undersea adventures, and more complex puzzles. KiwiCo's crate kits all have a pretty heavy emphasis on STEM learning, but they do it in such a way as to be approachable and exciting.

Boxes start at just $15.50 per month, which is a steal compared to most baby toys that you'll see in a big box store, so definitely consider ordering one for your baby.