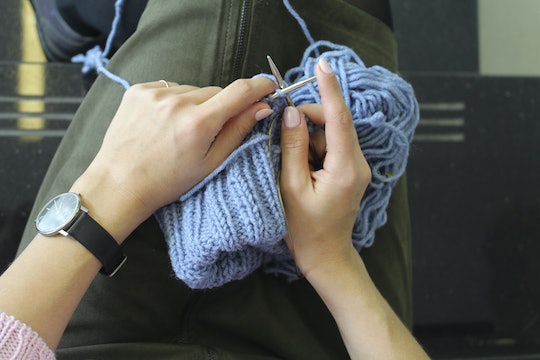 A British charity has conducted a review of several studies and concluded that knitting can help with mental illness and chronic pain, according to the Huffington Post. Knit for Peace, which was originally conceived as a venture to generate income for victims of the Rwandan genocide, has now grown into an international organization whose participants donate handcrafted goods to hospitals, women's shelters, prisons, refugees, and more. The group reviewed previous studies on the potential health benefits of knitting, and also conducted a survey of its volunteers, and found that the hobby can help reduce depression and anxiety, slow the onset of dementia, and distract from chronic pain.

The report, which was published on Knit for Peace's website, notes that knitting is particularly beneficial to older people, as they can still participate in the activity with diminished sight or strength, and knitting groups can help them to stay social and ward off loneliness, a problem that's of particular concern for the elderly. One study cited in the report found that older people who participated in knitting, crafting, and similar activities were 30 to 50 percent less likely to have mild cognitive impairments than those who didn't. Knitting also "induces the body's natural relaxation response," according to the Huffington Post, lowering heart rates by an average of 11 beats per minute, which led to a drop in blood pressure.

The majority of respondents to the group's survey — 70 percent — reported that they believed that knitting improved their health, and 86 percent said that it helps them to feel relaxed. In addition to reduction of depression and anxiety and distraction from chronic pain, the report also claims that knitting can lead to an increased sense of well being, usefulness, and inclusion in society, and a reduction of loneliness and isolation. According to the Telegraph, knitting helps chronic pain by "switching off alarm signals in the brain, because the focus is turned elsewhere." Repetitive movement can also boost serotonin, which helps to dull pain and also improves one's mood.

The authors of the study believe that "prescribing" knitting to patients could potentially save the National Health Service billions of pounds; currently, the U.K. spends £2 billion a year on blood pressure medication, about £300 million on antidepressants, £26 billion on dementia, and billions more on chronic pain, according to the Telegraph.

Survey respondents also offered other anecdotal evidence of other potential health benefits to knitting; one claimed that keeping her hands busy with needles and yarn helped her quit smoking and lose weight by cutting down on mindless snacking while she watched TV in the evening.

And knitting isn't just for grandma anymore; according to the New York Times, about one-third of women ages 25 to 35 knit or crochet. Dr. Herbert Benson told the Times that the repetitive action of needlework can induce a state of relaxation similar to the ones achieved by practitioners of meditation or yoga. In addition to lowering blood pressure and heart rate, it can also ward off levels of the stress hormone cortisol.

If you're considering knitting for your health, but not so keen on having a home littered with afghans, there are a number of charities looking for crafters in the United States, as well; the website Craftsy has a roundup of a dozen groups who'd be happy to accept the fruits of your labor. And if you're interested in boosting the mental health of the public at large via your new hobby, maybe consider a foray into yarn bombing, the most charming form of graffiti the world has ever seen. Practitioners of this craft knit custom cozies for street signs, bike racks, and other public structures.

Whatever you do with the final results, knitting can help not only the knitter, but everyone their work touches. Best of all, it's probably much easier than you think; why not give it a try?