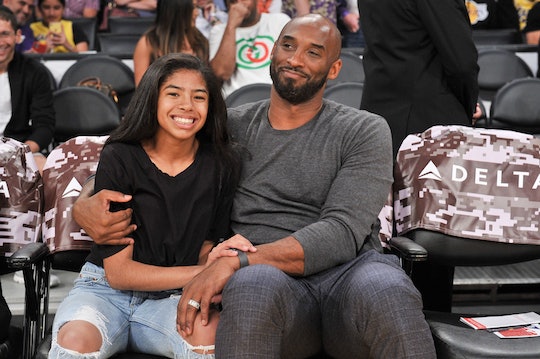 NBA legend, Oscar winner, and father of four Kobe Bryant died in a helicopter crash on Sunday morning. NBA officials confirmed to the Los Angeles Times that Bryant's 13-year-old daughter Gianna was also killed in the tragic accident, along with seven others who were on board the helicopter. The basketball icon was 41 years old and leaves behind an incredible legacy and loving family.

TMZ first reported of Bryant's tragic death on Sunday, Jan. 26, initially noting that he was traveling with four others and the crash occurred in Calabasas, California. According to the Los Angeles Times, Los Angeles County Sheriff Alex Villanueva later confirmed that nine people were on board the helicopter, including the pilot and eight passengers. The Los Angeles County Sheriff’s Department reported on Twitter earlier in the day that there were no survivors; officials have not yet confirmed their identities. According to TMZ, Bryant's wife Vanessa was not on board.

Heartbroken and shocked fans of Bryant quickly took to social media to mourn the loss of the beloved NBA star and to send their love to Vanessa. On Sunday, Dwayne Wade wrote on Twitter, "Nooooooooooo God please No!" Nikki Bella wrote that she was "saddened to hear" the tragic news. "This one is hitting me hard. Everyday is fragile. Life is so precious. Kobe thank u 4 having an amazing impact on so many in this world. So much love is being shared today. RIP. Light & love 2 Vanessa & his family," she wrote.

After two decades playing for the Los Angeles Lakes, Bryant retired from his impressive basketball career in 2016, according to the Wall Street Journal. In December 2017, according to Sports Illustrated, the NBA retired Bryant's jersey numbers, 8 and 24.

Bryant went on to win an Oscar in 2018 in the Best Animated Short Film category for Dear Basketball, which was narrated by Bryant and based on a letter he wrote in The Players' Tribune in 2015 announcing his retirement.

Bryant's last social media post was shared just yesterday on Instagram. "On to #2 @kingjames! Keep growing the game and charting the path for the next," he captioned a touching candid shot on him and LeBron James, congratulating James on passing him on the NBA's scoring list.