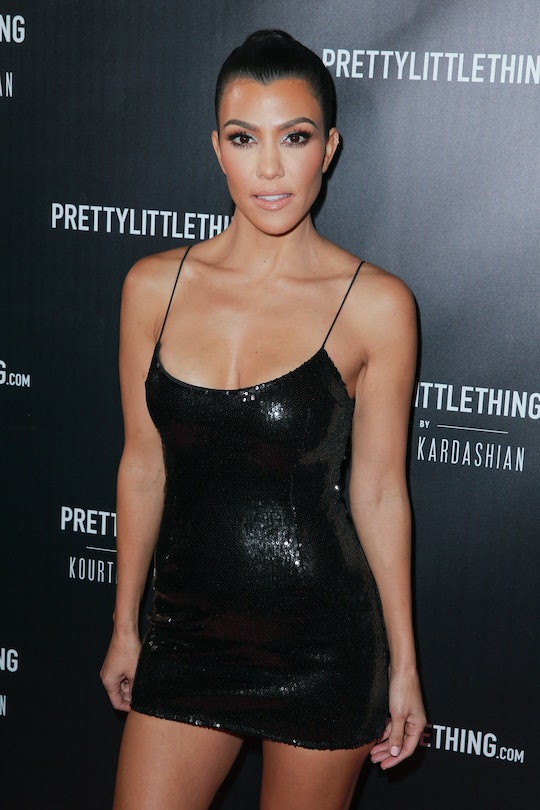 The Kardashians are known for their ever-growing family, so it should come as no surprise that mom of three Kourtney Kardashian is considering freezing her eggs, according to the Daily Mail. Kardashian, who is 38, doesn't want to close the door on having more children, but she also doesn't want to rush into it just because her biological clock might be ticking. As she shared in a clip for an upcoming episode of Keeping Up With the Kardashians, she explained that she doesn't want to deal with the pressure of having to make a definitive decision right now, and that's something a lot of millennial women can certainly relate to.

In the clip of the upcoming episode of KUWTK, according to People, Kardashian tells her sisters Khloe and Kim that she wants to freeze her eggs. "So, I’ve been thinking about freezing my eggs ... I should just do it so I don't have to think: 'Is this what I want, to have kids?' It's like, putting too much pressure," she said, according to People.

Many women Kardashian's age — typically between the ages of 35 and older, though some women may decide to undergo the process earlier than that — may consider freezing their eggs as a way to give themselves more time and freedom to become a parent on their own time. Egg freezing, also known as oocyte cryopreservation, can be costly and a physically draining process, but it can also be a great option for many women to preserve their fertility.

Kardashian has talked about adding to her family before, specifically with ex-boyfriend Scott Disick since he is already the father of their three kids: Mason, 8, Penelope, 5, and Reign, 3, as reported by Hollywood Life. People reported that on the Season 14 premiere of KUWTK, she said, "I feel like I would [have another baby with him] if the situation was right. But that doesn’t mean, like, tomorrow, guys. So don’t get any ideas."

In recent months, according to Metro UK, Disick also said on the show that he would have more kids with Kardashian if she wanted to as well. But, Kardashian may not have Disick on the brain anymore since she has a new boyfriend now, according to The Sun. Currently, Kardashian is dating 24-year-old Younes Bendjima and the father of her children, Disick, has also moved on, currently dating 19-year-old Sofia Richie.

Recently, though, a source told Hollywood Life that Kardashian was considering having a fourth child with Bendjima at some point, though she has not publicly discussed her plans. This reportedly did not sit well with Disick, as the source revealed:

Kourtney wants more kids and she made the mistake of telling Scott that she might go in a new direction and have a baby with Younes. Scott became furious with Kourtney and went off on her. Scott is really jealous of Younes right now and feels it is important to have the continuity in their family and feels he should be the only father all of her children.

Whether or not Kardashian makes the decision to have a baby with Disick, Bendjima, or someone else in the future, this recent KUWTK clip suggests that she may be taking the steps that many women her age consider to prepare herself. Kardashian considering egg freezing puts the future of her family in her own hands without the pressure to make any huge decisions right now. Some things you can't plan for, but thanks to advances in technology, women now have more freedom when it comes to something as big as becoming a mom. After all, life is all about timing, right?