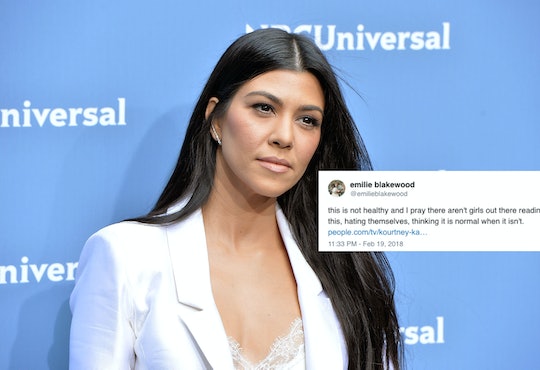 No matter what they do, it seems like the Kardashian-Jenner sisters are criticized for their bodies. When Kim Kardashian was carrying her first two children, she received backlash for how "inappropriate" her clothing was and for the amount of weight she gained. Unsurprisingly, Khloé Kardashian is being shamed for the fact that she chooses to exercise while pregnant. And most recently, the eldest of the famous sisters is receiving flak after disclosing her current weight. Kourtney Kardashian says she only weighs 36 pounds more than her son, and people are seriously bashing her for it.

First of all, here's a little background info for those who aren't as familiar with this lesser-known Kardashian. Kourtney, 38, is the eldest daughter of Kris Jenner and the late Robert Kardashian, according to Glamour. Currently, she has three children with her ex, Scott Disick — Mason, Penelope, and Reign. Since the birth of her third child in 2014, the reality star has been documenting herself getting back into pre-baby shape, People reported. From time to time, this has included sharing the number on the scale with her social media followers. In April 2015, for example, Kourtney revealed that she was at 116 pounds. "I'm 5 feet tall, so everyone relax," she captioned the photo. "I'm on a workout kick, tying to bring some Monday motivation."

During a deleted scene from the Feb. 18 episode of Keeping Up With The Kardashians, it was revealed that Kourtney currently weighs 98 pounds, Us Weekly reported. The clip showed Kourtney, Khloé, and their friend, Simon Gebrelul, hanging out in Khloé's kitchen while making salads. Kourtney brought up a recent, strenuous run she went on, and then Khloé told Gebrelul, "You know she's 97 [pounds]?" To which Kourtney replied, "Guess what? I gained a pound. I’m 98 [pounds.]” She added, "You know Mason is 62 [pounds]?" Many people who caught wind of Kourtney Kardashian's weight took to Twitter to subtly (and not-so-subtly) shame her. "98 POUNDS?!" one person exclaimed. "honey sweetie no. everyone please don't think this is what you should be doing. Eat healthy & in good amounts but you don't have to do this. Weighing as less as possible isn't always healthy or sexy. Just take care of yourself."

Another Twitter user wrote, "This is not healthy and I pray there aren't girls out there reading this, hating themselves, thinking it is normal when it isn't."

Yet another chimed in with a simple question: "Is that a healthy weight for her age??" (Spoiler alert: That's not how it works.)

Still, others called her out for "lying" about her real weight.

Admittedly, my knee-jerk reaction to seeing a number under 100 pounds for an adult woman was, "Wow, really?" But here's the thing that many critics are forgetting: Kourtney Kardashian is actually at a healthy weight when you take into consideration her height. In an episode of Keeping Up with the Kardashians, Khloe measured her older sister, Kourtney, on-camera. Kourtney's unofficial height at that point was 5 feet, 1 inch. (Although, if you search Kourtney's height on Google, it comes back at 5 feet even.) Either way, the pint-sized star has a healthy BMI. Simply enter the star's height and weight into any BMI calculator — like this one from the U.S. Department of Health & Human Services — and see for yourself. At 5-feet, 1-inch and 98 pounds, Kourtney's BMI is 18.5. And at 5-feet and 98 pounds, her BMI is 19.1. Anything between 18.5 and 24.9 is considered a healthy weight, according to the website.

Still, plenty of Twitter users came to Kardashian's rescue, pointing out the important piece of information critics seem to be ignoring.

So the next time a celeb (or anyone, for that matter) reveals a lower-than-expected number on the scale, maybe we should all take a step back and take note of the person's height. If Kourtney Kardashian were just a couple of inches taller, 98 pounds would be considered underweight. But she's not. As long as Kourtney is healthy and discusses her workout and diet plans with her doctor, she shouldn't be shamed for how much she weighs — regardless of how close it is or isn't to her 8-year-old's weight. At the same time, others shouldn't necessarily aspire to weigh 98 pounds. Women should definitely talk with their doctors to determine what a healthy weight is for them. Because a person's health is so much more than a number on the scale.