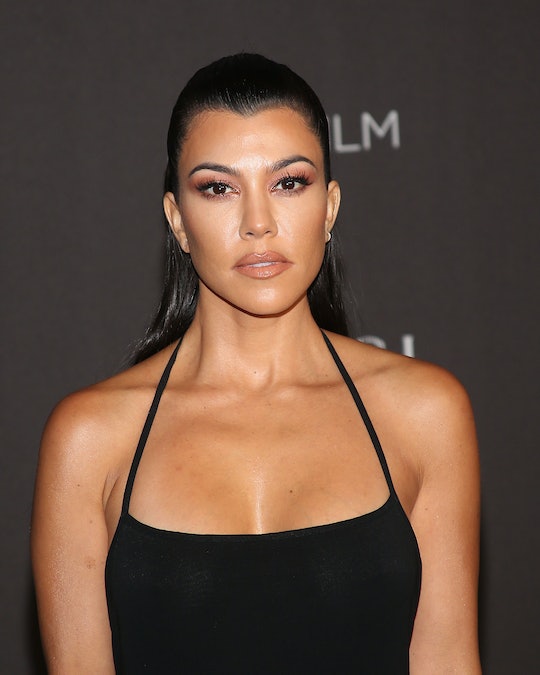 Reality television star, influencer, multi-millionaire, and now a website guru? Kourtney Kardashian can add editor-in-chief to her list of accomplishments. Today, she announced the launch of her new site, Poosh, that aims to reach the modern woman in a way that hasn't been done before and fans are clicking over in droves to see what it's all about. Kourtney Kardashian's new lifestyle site, Poosh, is everything you'd expect it to be.

The content up on the site is pretty much what one would expect from a website curated by a Kardashian — including an article about how to achieve the perfect pouty lip, an article about turmeric, and an interview with Kris Jenner on what it's like to be a boss.

And if you're wondering about the name, as many people are, it's Kardashian's pet name for her daughter Penelope, according to PopSugar.

According to the website itself, Poosh is meant to "to educate, motivate, create, and curate a modern lifestyle, achievable by all."

"I decided to launch Poosh because I felt that there was something missing in the healthy lifestyle space,” Kardashian said in the "about" section of her site. "Healthy living gets a bad rap; it’s as though if you care about what you put in — or on — your body, then you’re not sexy or cool. But this just isn’t true, and Poosh is here to prove just that."

She's been teasing the launch for the past few months, with some revealing Instagram photos, according to ET Online.

Readers can be on the look out for guest writers, along with content about health, wellness, beauty, fashion, interior decor, and kids. Kardashian will cover a lot of it herself, while her team and other writers will fill in the rest, according to Women's Wear Daily.

Ever the entrepreneur, Kardashian, of course, included a shopping section on the site, where readers can purchase Kardashian-curated items, according to Page Six. On the list? Kardashian's favorite everyday mascara, designer shorts, home decor items, and more.

For many, Poosh is totally reminiscent of Gwyneth Paltrow's Goop, which has become a mainstay in the healthy and beauty routines of the elite, according to Page Six.

One similarity is that Poosh will eventually be selling it's own branded products. There's even a section up now on the site, with a coming soon icon.

But one difference is that Poosh editors say their products and content will be accessible by all.

"We want to show that this modern way of life that Kourtney has etched out is achievable by all,” Sarah Howard, Poosh's COO, told WWD. "You don’t have to be a celebrity, it doesn’t have to be so elitist."

With a net worth of $35 million, according to Money, Kardashian isn't exactly the everyday, modern woman, but she feels she can offer a lot.

"The modern woman, in my opinion, is somebody who cares about the planet, cares about what we’re putting in our bodies from the inside out, and just doing our best without feeling judged for not being perfect," Kardashian told WWD.

There's no telling what's next for the site, as it's still filling out its pages with content. But with a loyal fan base and the knack for success, Kardashian might have stumbled on her next, most lucrative career.