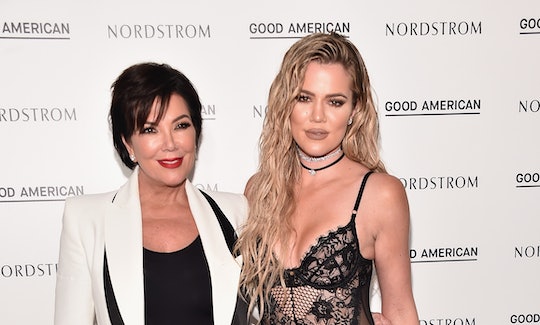 It's becoming ever harder for the Karashian-Jenner clan to keep secrets from the public, and most people were reasonably sure that the reports of the newest baby's arrival were true. But just in case you were waiting for the official story, Kris Jenner confirmed that Khloe Kardashian gave birth on Thursday with a hilarious Instagram post. As the unofficial spokesperson and gatekeeper for all the family gossip (and also Khloé's mom), Jenner is the one the public looks to for verification of new rumors, and according to her post, this one is true.

TMZ first broke the story on Thursday morning, claiming that Khloé had her daughter in Cleveland at around 4 a.m. Eastern Time, surrounded by Jenner, older sisters Kourtney and Kim Kardashian, her best friend, Malika Haqq, and the baby's father, Tristan Thompson. Later that afternoon, W Magazine published an Instagram post congratulating the family: a video of Kendall Jenner that was edited to make her say "baby" three times in a row. "When three of your sisters give birth in under a year," the caption read. "Congratulations to @KhloeKardashian on welcoming another girl to the KarJenner clan." Grandma Kris is presumably pretty busy right now, so she chose to repost the video and simply add "BLESSED!!!" as confirmation.

This is a particularly trying time for the family, because in the days before Kardashian went into labor, the Daily Mail published a video that appears to show Thompson kissing another woman last weekend. TMZ also published a second video that allegedly shows Thompson and the mystery woman arriving at a hotel together later that night, as well as a third video that allegedly shows Thompson kissing (and more) with two other women, which the site claims was taken last October, when Kardashian was three months pregnant. Thompson's and Kardashian's reps didn't immediately respond to Romper's request for comment.

It's happy to see that in the midst of all this drama, Kris still considers her family to be "blessed," and that's probably a little easier for her when she has a brand new grandchild — make that three brand new grandchildren — to keep her mind off of more troubling things. Kylie gave birth to her daughter, Stormi Webster, in February, and Kim's surrogate gave birth to Kim's daughter, Chicago West, in January. In addition to the new bundles of joy, Kris has six more grandkids: Kourtney's kids, Mason, Penelope, and Reign Disick; Kim's two older kids, North and Saint; and Rob's daughter, Dream Kardashian. Now, she's got enough for a baseball team.

Jenner's clearly psyched about filling up her house with even more kids; after Kardashian first announced her pregnancy (via Instagram, as is the custom in that family,) she chimed in with a repost, captioning it, "God is so good!! I am beyond excited! What a blessing!!!!!!!" She's also got a good sense of humor about the cavalcade of infants the family is currently experiencing, as she displayed on the Keeping Up With the Kardashians "A Very Kardashian Holiday" special. According to E! News, when discussing the "calm before the storm," a tearful Jenner expressed gratitude for her large brood, while still managing to crack a little joke:

I used to pray that one of you guys would have a baby, and now it's like a faucet that we turned on and won't turn off. The fact that I have all these grandchildren, it's been the most amazing journey to watch your kids, because it's truly the meaning of just life.

Such a Grandma thing to say, am I right? Or should I say, a "Lovey" thing to say; according to the Daily Mail, that's what Jenner has her grandchildren call her, because you know that woman doesn't want to feel old. Enjoy those babies, Lovey.