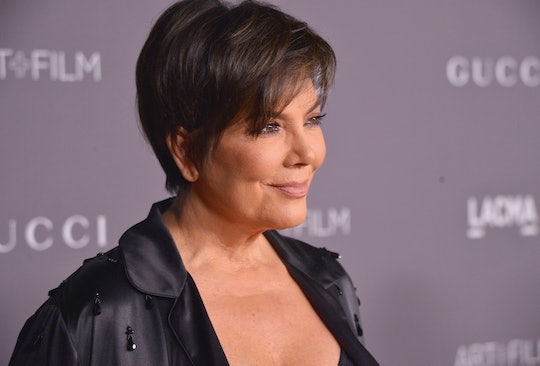 Ever since Kylie Jenner officially confirmed the birth of her baby girl, fans of the Keeping Up with the Kardashians star have been dying to know as much as they can about the new family of three. So far, the Lip Kit mogul's social media followers have been gifted with an 11-minute video of her pregnancy journey, a handful of photos of baby Stormi, and an intimate look at the new mom's postpartum body, among other tidbits of info. Still, many fans are probably wondering what Jenner and her boyfriend, Travis Scott, are like as new parents. Are they hands-on? How do they split their parental duties? Has having a baby changed their relationship? Recently, Kris Jenner opened up about Travis Scott as a dad to baby Stormi, it's so great to hear.

On Wednesday, Kris Jenner was spotted at the grand opening of Nassif MD Medical Spa in Beverly Hills, as Us Weekly reported. "He's so great," Jenner told reporters, of the father of her grandchild. "He's really, really great, really attentive, and couldn’t be cuter with Kylie.” However, when it comes to a certain aspect of parenting, 25-year-old Scott may not be quite as hands-on. When asked if Scott is a diaper-changer, Jenner responded:

You know what, I haven’t really seen him change a diaper, but I’m never there at diaper time.

Hmmm. If my memory serves me correctly, "diaper time" for a newborn is basically all of the time. All three of my babies, at least, seemed like they were peeing constantly. And as new parents soon find out, a baby's favorite time to poop is exactly 10 seconds after they're given a fresh diaper. Because of course.

Diaper-changing aside, Jenner also gave a little insight about how Kylie Jenner is coping with new motherhood, as People reported. “It’s great. She loves it. She’s doing really, really great,” she told reporters. “The baby’s happy and healthy and everybody’s good at home. So we’re excited.”

It's wild to think how far Kylie Jenner and Travis Scott have come in the past year isn't it? I mean, they weren't even an item a year ago. In fact, they were first spotted together as a couple back in April, 2017 — just weeks after she split with longtime boyfriend, Tyga, Us Weekly reported. After that, Jenner and Scott were spotted and photographed at various public outings. You know, typical celebrity couple stuff, right? Things seemed to be getting serious when the couple revealed they got matching butterfly tattoos, E! News reported. And then TMZ broke the news of pregnancy rumors in September.

During the months that followed, both Jenner and Scott didn't confirm or deny these rumors and remained out of the spotlight. Jenner finally confirmed the pregnancy on Super Bowl Sunday, along with a birth announcement. "I'm sorry for keeping you in the dark through all the assumptions," Jenner posted on Twitter and Instagram.

She continued, "I understand you're used to me bringing you along on all my journeys. My pregnancy was one I chose not to do in front of the world. I knew for myself I needed to prepare for this role of a lifetime in the most positive, stress free, and healthy way I knew how."

Two days later — in what is now the most-liked Instagram photo of all time — Jenner revealed the name of her baby girl: Stormi Webster.

On March 1 — baby Stormi's 1-month "birthday" — the proud papa shared a photo on Snapchat of his little girl, along with a sweet message. “My lil mama 1 month today,” the rapper wrote on a close-up of Stormi's shirt that sported the words, "Daddy." He wrote, "Her favorite unit of course." Awww!

In light of their whirlwind relationship — going from casually dating to parenthood in less than a year — it's nice to hear the young parents seem to be adjusting well to their new roles as parents to baby Stormi. But just in case Scott is skipping out on diaper duty, here are some words of parenting wisdom: Get on that, man!