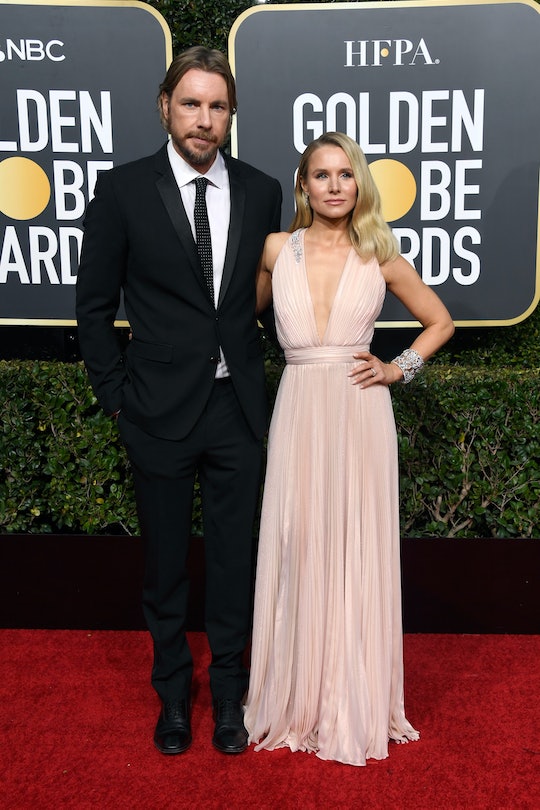 For most A-list celebrities, getting home after the Golden Globes means one thing: SLEEP. But this year, as Kristen Bell posted on Instagram, she and Dax Shepard discovered something on their door that kept them awake a bit longer. In fact, Kristen Bell and Dax Shepard's kids wrote them valentines — complete with drawings — while their parents were at the Golden Globes, and it's honestly the sweetest thing.

After the awards ceremony wrapped up, Kristen Bell and Dax Shepard headed home, where their door was plastered with heart-shaped valentines from their daughters: Lincoln, almost 6, and Delta, 4. "OK, look at what we just came home to," a proud Bell said on her Instagram Story Sunday night, showing off the decorations.

Each heart had a drawing of Bell and Shepard done by one of her daughters, with a message written around the border, presumably written by a babysitter. "I love you Mama, and I love that you have a nomination. I love you. Bye. Delta. I love the 'domination' so much," Bell read out loud off of one of the hearts.

"Happy birthday Dada I love you. I think just if you want to we can buy you a birthday cake, but if you don't want sugar, we won't. Love Delta," read another. Shepard celebrated his 44th birthday last week, on Jan. 2.

Now, if that's not consolation for Bell not winning a Golden Globe this year, I don't know what is. (Bell was nominated for Best Actress in a Musical or Comedy TV Series for The Good Place, but Rachel Brosnahan of The Marvelous Mrs. Maisel took home the award, according to IndieWire.)

Bell panned the camera around to show off the rest of the drawings their kids did. Look, I know all children's art is beautiful and all that, but is anyone else a little alarmed by the way Delta and Lincoln view their parents? A message surrounding a particularly terrifying, but kind of hilarious, sketch of Shepard reads: "Dear Dad, I really love you, I am happy it's your birthday and am happy because I want to find out when your birthday is gonna be at a place/Houston's." (Houston's is a chain restaurant with a few locations in California.)

And then there's a closeup of a drawing of both Mom and Dad together, surrounded by smaller hearts and the word "Love" a few times.

It's clear that Bell and Shepard were happy to return home to their kiddos — but that doesn't mean they didn't have a great time at the Golden Globes. For one thing, the couple looked gorgeous on the red carpet, even while acting like they were in Zoolander.

Bell also kept fans updated on the couple's getting-ready process, which for them, involved eating a whole lot before putting on their formal outfits.

Not to mention, they both looked pretty dang cute from their seats in the audience.

Here's hoping Kristen Bell, Dax Shepard, and their kids bring us the same caliber of content at the upcoming Oscars.