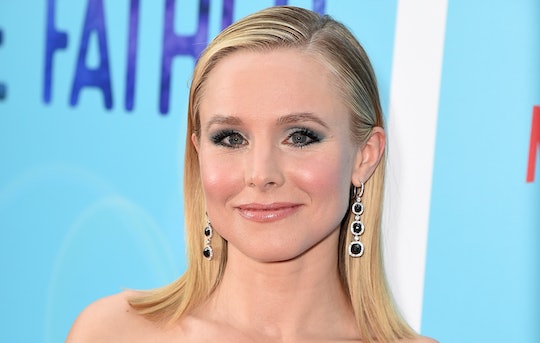 If you're following Hollywood's most relateable couple on social media, you might remember Dax Shepard sharing a photo of his wife on Instagram last month captioned, "My bride wears gloves in the pool because she hates the feeling of pruney finger tips on skin. #Hollyweird #iloveher." During a Wednesday night appearance on Jimmy Kimmel Live, Kristen Bell explained why she wears pool gloves, and once you hear her explanation, it's actually not that weird after all.

"I'm acutely aware of the ridges in fingertips," Bell told Kimmel. "I would call it a very serious, undiagnosed and yet-to-be discovered medical condition that tens of people in America might also suffer from." Kimmel then downplayed Bell's aversion by replying, "You don't like the feeling of pruney fingers," but Bell corrected him: "It's more than that, though, to me. It's like I said: it is a medical condition. The actor and host were chuckling throughout the exchange, as were the audience members, but Bell did her best to demonstrate how serious her problem was. "When I go like this," she explained, rubbing one index finger tip against the other, "I feel the ridges like a bassline at a club that's too much. And when they're wet, it's like, I'll puke. I will truly puke."

And while there's no entry in the DSM-5 for being squicked out by wrinkly fingertips, that doesn't mean her condition isn't real. Not every phobia has been officially named, but plenty of people are diagnosed with phobias and anxiety relating to any number of things. If I were truly terrified of, say, men named Bob who wear blue shirts with yellow ducks printed on them, I wouldn't expect that someone has already translated that fear into Latin and put it in a book, but that wouldn't make my fear any less real, nor would it make any reputable doctor take it less seriously.

Take, for example, the fear of touching Styrofoam. There's no official title for that condition, but I'm willing to bet that you, or someone you know, can relate (if not, go ask your Facebook friends). In fact, medical professionals even have a theory about why so many people have a Styrofoam aversion. "This is a neurological disorder, where faulty brain wiring causes a particular aversion towards the feel, sound, or appearance of Styrofoam," clinical psychologist Perpetua Neo explained to Yahoo Health. "As a result, a person will experience involuntary responses like cringing, raised pulse, or goose bumps." If you're more freaked out by cotton balls, however, you're in luck. According to The Cut, that's been officially recognized as sidonglobophobia.

Bell told Kimmel that she's particularly bothered by touching things with her pruney fingers, which I totally get, because they do seem to be more sensitive when they're all puckered up like that. She can handle touching some things, she said, like concrete or her bathing suit, but skin is a non-starter. "When your children are in the pool, you need to grab them ... The problem is, my very serious medical condition makes me want to step back, and I don't want to grab my kid. And I'm like, 'Well, this can't happen.'"

Interestingly enough, according to Smithsonian magazine, the reason that our fingers get all wrinkly when they're wet is so that we can grab things more easily. The deeper ridges provide better traction, just like on a tire. But that doesn't help Bell. Kimmel ended up turning her phobia into a bit culminating in a fake pharmaceutical commercial for "Pulgluvia," which I personally feel was a bridge too far, but luckily, her good friend, Amy, offered a real solution by buying her a pair of scuba gloves for her birthday. "I'm not ashamed," Bell told Kimmel. "In my lifetime, I want to remove the stigma of the maybe 10 people who also suffer from this. You're not alone." It's great that she has a sense of humor about her phobia, but honestly, she shouldn't have to.