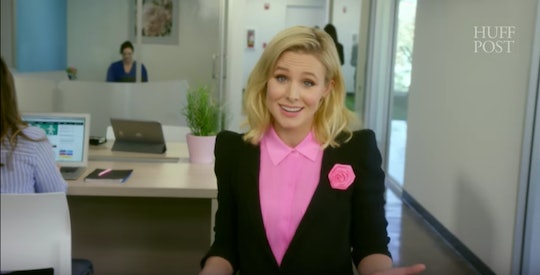 For as long as women have been working, they have experienced inequalities in the work force. Equal pay across all genders and races is something that has been fought for over the years and can oftentimes feel frustrating for women, working amongst other men, and knowing they're statistically getting paid less to their coworkers. In a hilarious video, Kristen Bell mocks gender pay gap and basically says everything that women wish they could about their jobs.

The video is just two minutes long but packs a punch during its short delivery — women are not being paid fairly and quite frankly, it is very frustrating. Bell looks fantastic (talk about one powerful suit), as she strolls through an office building, sharing her remarks about pay equity and what oftentimes feels like the unfair treatment of women in the workforce. The video produced by the Huffington Post, is an obvious commericial for a fake business and parody about the treatment of working women. The video starts off with a line that goes straight for the jugular and continually gets better the longer it gets. "Why outsource all of your production to faraway countries like India, Narnia, and China when we have the cheapest and best workforce right here in the good ole U.S. of A.: women," Bell says in the video. Ouch — that hurts.

"...women are a bargain at the work place since you only have to pay them 77 cents on the dollar," Bell says, which then inspires women of color in the video to point out that they actually make less than that. Bell continues a few moments later: "Ladies, who cares if you make 30,000 less than men at your own job when there are free tampons in the bathroom." In perhaps one of the best lines of the video, Bell pokes fun of the unrealistic requirements for working women: "Best of all, you can promote literally any one else besides them, especially if they're less qualified."

The sad thing is, while this video is pretty funny at the end of the day, it might hit a little too close to home for some. Those comments about women's wages are true — according to a study done by the National Partnership for Women and Families, white women make 79 cents on a white man's dollar. And according to the same study, black women make 60 cents on a white man's dollar meanwhile hispanic women only make 55 cents. If watching the video has made some women angry, I'm right there with you. Luckily, over 50 American companies have signed the White House Equal Pay Pledge and have committed to promoting equal pay and fair treatment for women who work for them. So, progress is being made. However, Bell's video echoes the thoughts of countless working women who feel as if they're not getting the credit they deserve — especially when it comes to pay and promotions.