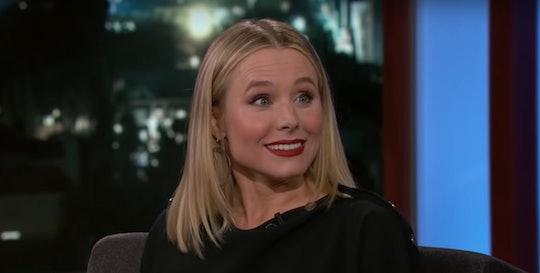 OK, who among us hasn’t made some ridiculous move in the quest to get the attention of someone we’re interested in? All of us, right? It seems this also applies to celebrities, because on Wednesday night during an appearance on Jimmy Kimmel Live!, everyone's favorite funny woman Kristen Bell revealed she too went to extreme lengths to win over her beau, Dax Shepard. She even sustained what sounds like a brutal injury.

The actress was on the talk show to promote her new Netflix movie with Kelsey Grammar, Like Father, but talk turned to all kinds of funny family topics, including the early days of her relationship with Shepard. During the segment, she explained that because of Shepard’s interest in motorcycles, when the couple first began dating she secretly went and got her motorcycle license to impress him, according to E! News. Then she went on to talk about the “other thing” she hid from him that also involved a motorcycle.

As the couple filmed the 2010 movie When In Rome, they took time one day to rent a scooter to tour the city. When they stopped at a gas station, as she told Jimmy Kimmel, Shepard noticed that Bell was fighting tears underneath her helmet. “I was sobbing,” she told the host. She revealed that she’d burned her leg, badly, on the side of the motorcycle and because Shepard had warned her about that very thing when they got on the bike, she didn’t want to tell him. In fact, she’d been in pain for about four miles with a burn that went through her linen pants and into the muscle of her leg. Ouch!

I had a similar burn from the exhaust of a car and I can testify it is very painful!

The best moment of the story is when Kimmel asked Bell what her goal was in not telling Shepard about the injury. Looking at him like he’s crazy she replied, “My goal was to bag Dax Shepard.”

Kimmel made reference to Bell’s leg becoming “pruny,” as she explained she had to stand in a fountain while filming the movie with a garbage bag tied around leg, to protect the injury. It was a joke about a funny quirk that Shepard revealed to the world on his Instagram. Bell, it seems, has a real phobia about touching things with pruny fingers when she’s been in the pool, according to TODAY. So much so, that she wears pool gloves! One of her friends found the gloves for her, which are meant for scuba diving, as TODAY reported.

“I would call it a very serious, undiagnosed and yet-to-be-discovered medical condition that tens of people in America might also suffer from," Bell emphasized to Kimmel, adding:

... The problem arises because when your children are in the pool you need to grab them because they swim ... especially my youngest; [she's] like a bulldog, she just sinks. So I needed to be able to grab her. The problem is, my very serious medical condition makes me want to step back.

Have to admit, not sure I’d be as cool as Bell is if my husband revealed my weird quirks to the entire world. But I think everyone is so glad she is, because this couple is a never-ending buffet of joy as they let the world in on their family life. Just look at this beautiful nonsense.

Although she’s willing to go to all lengths to bring joy to her marriage, there is one place Bell now refuses to return to. A motorcycle. Though her husband regularly visits the track, as he documents on social media, Bell is happy now to find other ways they can enjoy together time. “I’ve never ridden again. Never driven again, no desire,” she told Kimmel. “Look, we’re married. I can tell you. I don’t want to drive those things. They are terrifying.”