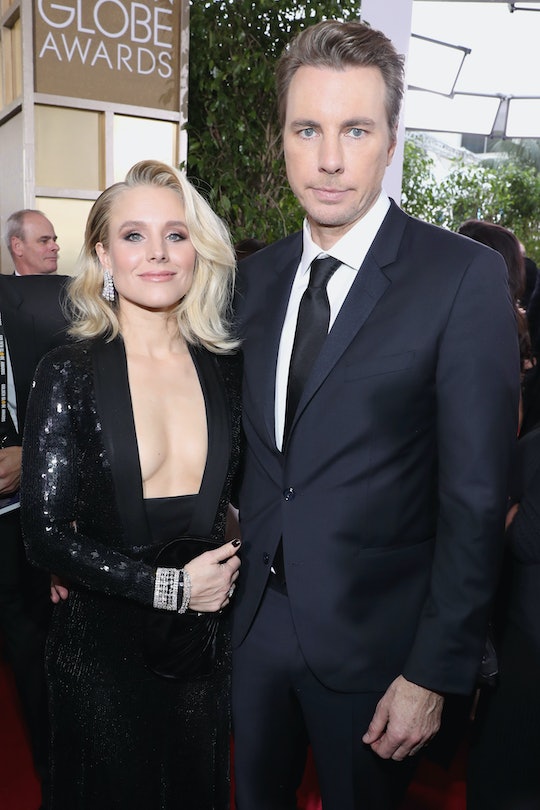 Every couple is different, but one crucial factor to a successful relationship is a willingness to to support one another through the rough patches. Motherhood gets downright dirty sometimes, and having a partner to help you through it can be crucial. Recently, Kristen Bell revealed that Dax Shepard once had to "nurse" her when she stopped breastfeeding, providing further proof that they are the definition of #CoupleGoals.

During a recent episode of her online series, Momsplaining with Kristen Bell, the host sat down with Scandal star and new mom Katie Lowes to talk everything breastfeeding and boobies. Bell talked about the adjustment that comes along with your milk, saying, "It is a little bit strange to go from an autonomous woman to all of a sudden being a food truck, 'cause that's essentially what you are."

They also touched on the change in nipple size during pregnancy and what makes for a "good latch." Bell asked, "Isn't it crazy how much of your nipple and your boob has to go in their mouth?" "They're biting a burger," Lowes responded. There was also a bit of discussion about breastfeeding in public and freeing that "muthaf**king nipple." However, the most eye-opening part of the talk came when Bell told Lowes that her husband once "nursed" from her to provide relief when she had her third case of mastitis after she stopped breastfeeding.

Bell began by setting the stage, saying, "I was in Atlanta. We couldn't call a doctor, and this was right after the baby stopped nursing." Lowes clearly realized right away that the story is going south and says, "So what do you do... Kristen? Oh. My. God." And Bell shared it all:

So I said to my husband, "I really need you to suck this out. We could talk about it, we could be weird about it, or you could just go ahead and nurse" .... He pulled it out. He had a cup next to him. He was pulling out and spitting into this cup, and I've never been more in love.

Wow. If that's not true love, I don't know what is — and also, yes, maybe a little gross.

Matitsis and plugged milk ducts are the leading cause of breast pain in breastfeeding mothers, according to Today's Parent. But what exactly was it that Shepard had to "pull out and spit" into the cup? Well, when a milk duct becomes inflamed or constricted, there can be milk backup behind the clog, leading to pain and swelling. When this milk sits there for a while, it thickens into a consistency that Today's Parent described as "like toothpaste." When this happens it can be hard to get the milk flowing out again.

Suffice it to say that Shepard really took one for the team when he unclogged his wife. The backed-up milk can grow bacteria and cause infection which makes the mother feel like she has the flu. Yikes. Fortunately, Bell had a partner who was willing to be her own personal breast pump in that emergency situation.

If that story sounds a little TMI to you, then I don't advise delving deeper into the wonderful world of Kristen and Dax. The two are famously honest about their experiences as a couple. They have opened up about their sex life, the key to a happy marriage (spoiler alert: it's couples therapy), and everything in between. Their candor is just one more thing to love about these two.

While the mental image of a grown man nursing from his wife probably isn't the most pleasant, there is something so endearing about Shepard's willingness to do what it takes to support his lady.