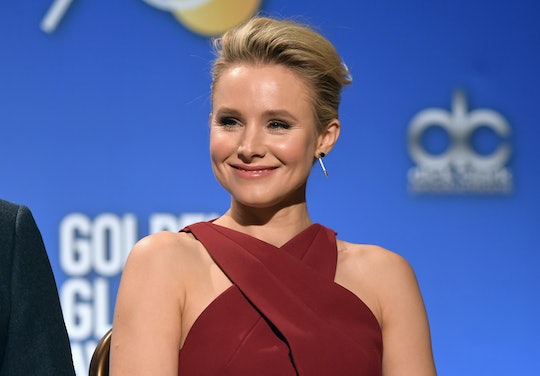 Parenting is hard. The sleepless nights, diapers, bullies, having to re-learn all that useless stuff from elementary school... But now, it's about to get a little easier, because Kristen Bell shared the ultimate parenting hack for the single toughest part about raising kids: getting them to eat broccoli. Get out of here right now if you have a magical unicorn toddler that actually likes broccoli, because nobody needs your condescension right now, Madison. Normal human children hate broccoli with a fiery passion that rivals cats' hatred of dogs or Donald Trump's hatred of the legitimate news media. But your girl has the solution.

For thousands of years, parents have struggled with trying to convince their kids to eat broccoli. We ask them to pretend that the florets are trees, and they're a giant or a dinosaur, gobbling them up. We douse it in ranch dressing, that wondrous panacea that can make just about any vegetable more tolerable. We pulverize it in a food processor and blend it into cheese soup that's literally just a bowl of cheese you can drink, for goodness' sake, how can you possibly still resist it? Nothing works. Or so we thought. Bell has not one, but two recipes guaranteed to work.

Bell shared her tip in an Instagram story, a frustrating choice of medium, as stories disappear after 24 hours. Luckily, the post was transcribed by People before it was lost forever to the digital ether. "Can I tell you a major secret to get people to eat broccoli?" Bell asked her followers. Pointing the camera to her stove, she showed some broccoli cooking in a pot. "Steam your broccoli, right? That's pretty normal." No, that's not the secret; she's just laying down the basics in case anyone out there thought they should be boiling it or frying it or some other weird method. It's what she added to the broccoli that makes all the difference.

Are you ready for her secret recipe? It's "salt, a little bit of crushed pretzels, and a little bit of Parmesan cheese." It's so deceptively simple! Salt, of course, because it makes all vegetables better. Parmesan, which my own child refers to as "super cheese," because again, it's a wonder topping. But pretzels! Wow. I don't know what they put in pretzels that makes children go berserk and eat like they haven't been fed in a week, but I never thought to use them as an ingredient before. This is a game changer.

But what if you and your kids are vegan, and Parmesan isn't an option? Do not, I repeat, do not resort to vegan cheese, because that tastes like sadness, and it'll turn them off of broccoli even more. Bell has you covered with an adaptation courtesy of her CHiPS costar, Cameron Cruz. Just replace the Parmesan with nutritional yeast and lemon juice, two staples which I assume are in every vegan's pantry (I wouldn't know, because I'm too selfish to give up cheese myself).

And if that doesn't work? Well, try, try again. According to Parents, kids may have to try a new food 10 to 15 times before they develop a taste for it. And if they still hate it after that, it may be in their genes, so go ahead and blame yourself a little bit. According to SBS (the Australian version of PBS), there's a gene that makes some people taste the bitterness of broccoli and other veggies more strongly than others. It's called hTAS2R38, and about 70 percent of people carry it. If you and your partner both think broccoli's a little bitter, but still tastes OK, that's normal, but it could also mean that your child carries two copies of the gene, making the bitter glucosinolate compounds in broccoli completely intolerable. If that's the case, your best bet is probably to have your kid hold their nose and maybe also bribe them. But try the pretzel thing first.

More Like This
Olivia Newton-John's Daughter Says Her Mom Was Her "Safe Place" In Lovely Tribute
Twitter Is Applauding Jennette McCurdy For Speaking Out About Toxic Mom In Memoir
Mindy Kaling Has The Chillest Response To Rumors That B.J. Novak Is Her Kids' Father
Drake Jokingly Roasted His Dad About The Tattoo He Got Of The Rapper On His Arm