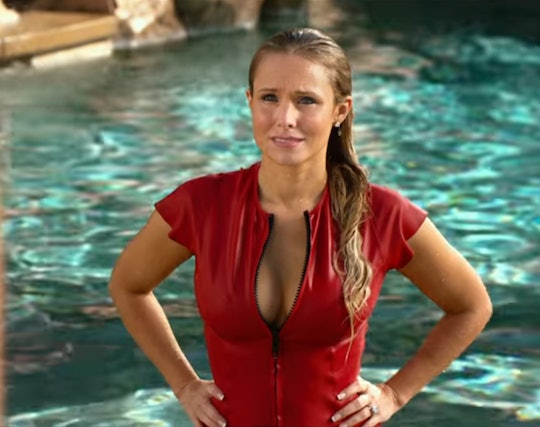 Why Kristen Bell Didn't Breastfeed For A Day

Celebrity moms are constantly getting shamed online for all sorts of perceived "bad choices," which is why it's refreshing to see one unapologetically admit to putting herself first. In an Access Hollywood interview to promote the movie adaptation of CHIPS, Kristen Bell said she stopped breastfeeding for a day in order to take advantage of the resulting swollen breasts for her role as a trophy wife. Bell said that she wanted her character to have "an aggressive boob job," and figured, "I've got 'em, let's use 'em."

Bell appears opposite Dax Shepard, her real-life husband, who also wrote, directed, and produced the film. He told Access Hollywood that it was Bell's idea to forgo her breast pump for about 18 hours, and unsurprisingly, he was pleased with the results. Bell was seemingly unconcerned with the possibility of internet scorn, even joking that "the kids were hungry, and I said, 'Daddy's gotta make a movie. Everybody's gonna need to deal with it.'" A bold move, seeing as famous mothers are regularly shamed for such innocuous things as nail art choices, drinking perfectly safe beverages heated in perfectly safe appliances, or even holding a baby in a completely normal way (seriously, someone please explain to me what's wrong with that picture). To jokingly insinuate that she starved her children (to be clear, I'm 100 sure she did not) is both brave and hilarious.

Anyone who's flown on a plane knows that you should always put on your own oxygen mask before helping anyone else. That's because you can't take care of others until you take care of yourself. For some moms, that might mean leaving the kids with their spouse or a babysitter so they can grab a drink with friends or take a yoga class. For Bell, apparently, that means that for three quarters of one day, she chose not to share her body with others, as she normally does. The result was a more accurate depiction of the character she and her husband created, leading to work she can be proud of, and more money in the bank to buy her daughters, Lincoln and Delta, anything they need.

No mother should ever feel obligated to breastfeed at any time. Some may never choose to do so, and others might want to supplement, stop sooner than they planned to, or even take a break for a temporary "boob job," like Bell did. Breasts may be biologically intended to feed babies, but the fact remains that since they're part of a woman's body, she owns them, and the choice of how to use them lies with her alone. It's important that everyone realize that, and Bell's use of humor to relay that message was absolutely perfect. CHIPS is in theaters March 24, for anyone who'd like to see those talented breasts in action.