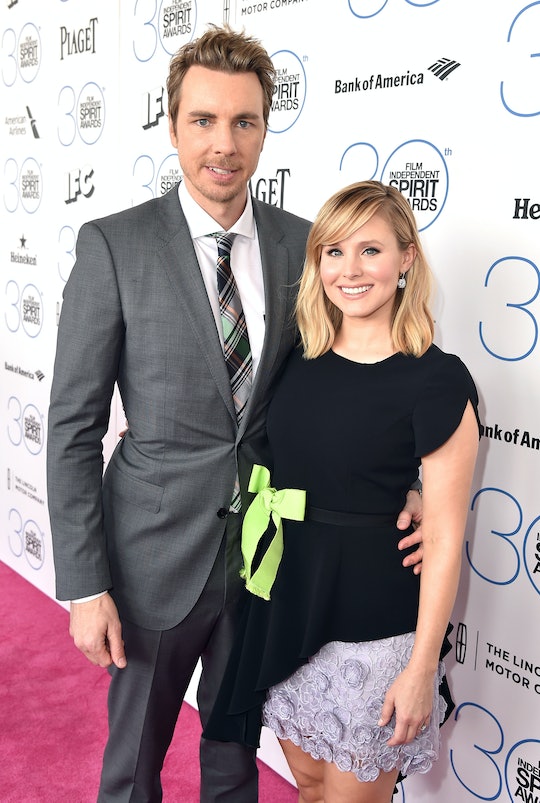 Having "the talk" with kids at any age is hard for a lot of parents — including actress Kristen Bell and her husband, Dax Shepard. Although their daughters might be pretty young (they're just five and three years old, according to Us Weekly), that didn't stop Bell from trying to have the talk with them. In a new interview, it was revealed that Kristen Bell tried to have the "sex talk" with her young daughters, but they were not having it. Yes, it's as hilarious as it sounds.

Bell told Us Weekly that things did not go according to plan when she and Shepard sat down their daughters, Lincoln and Delta, to have "the talk." This could have been for a number of reasons — and it could have been because of her very blatant approach to the subject.

"We said, 'Well, mom has a vagina, and dad has a penis and there's sperm, and an ovum, and they connect and it makes a baby,'" Bell told Us Weekly.

That's a pretty vivid description — and it was something that caused their daughters to immediately "check out" of the conversation.

"Truly, by the second sentence they had walked outside," Bell said.

Hey, at least Bell and Shepard are honest. This talk could have gone in so many directions — and having her kids not be interested in it (for now) is probably one of the better directions to go in.

Maybe something was more interesting outside, or maybe their kids simply weren't prepared for the talk — and that is perfectly OK. Bell and Shepard have plenty more years to give the talk to their daughters when they are ready, whenever that may be.

But just because her daughters weren't interested in having the talk doesn't mean that Bell is going to be any less interested in telling them the truth.

"We decided when we had kids to be very, very honest with them and never sort of spin a fairytale, even if it's about hard subjects," Bell told Us Weekly.

We talk, very bluntly, in some people's opinion, to our children about everything. They asked about sex. We said there's a penis. There's a vagina. There's an ovum. There's ejaculate. They combine. There's DNA. Then you grow in my belly.

But Bell is completely right for approaching the sex talk this way, according to Washington Post. When it comes time to talking about sex, parents need to talk about it with their kids before they're teens, according to U.S. World News & Report, make themselves available for questioning at any point, and use the correct names for body parts with their children to establish comfort. Bell and Shepard have all of those boxes checked.

It makes sense why Bell would want to be honest with her kids about this subject, especially since Bell revealed during an episode of The Talk last year that her kids have walked in on her and Shepard while they were having sex, according to People.

Although she is super fond of oversharing and telling the truth, Bell revealed, during a recent appearance on TODAY, that she does lie to her kids about one thing — the exact day of their birthdays. "Well, like, if it's a Wednesday, and we can't celebrate, and we're both working late, then guess what? Your birthday is Saturday," Bell said.

Bell's honesty (for the most part) is so helpful for her kids. Although they might not be interested in the sex talk now, they'll definitely be thanking her later for being so open.

It just might take them a little bit of time to realize this.