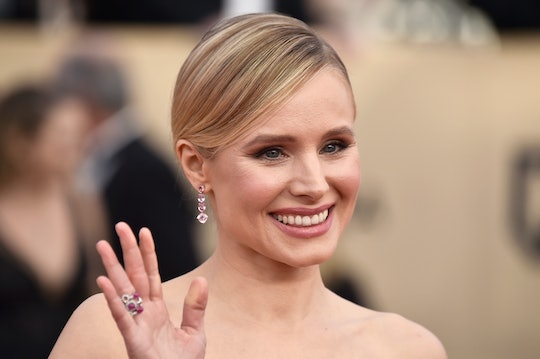 Kristen Bell is notorious for being unafraid to "go there" when it comes to giving interviews on controversial topics. The Bad Moms actress and mother of two IRL candidly shares hilarious/borderline gross parenting stories, expresses her opinions on politics, and tackles topics many celebs wouldn't touch with a 10-foot pole. But honestly, that's probably why so many parents (and non-parents alike) love her so darn much. It was recently revealed that Kristen Bell uses a "controversial" bedtime trick with her 3-year-old daughter, and her honesty is like a breath of fresh air.

Over the weekend, Bell was at the premiere for the upcoming IMAX movie, Pandas — for which she is the narrator — when she dished on the trick that helps her youngest daughter to fall asleep. "Look, I'll get controversial. My 3-year-old [Delta] decided to stop sleeping about nine months ago," Bell told press on Saturday while on the red carpet, according to Parents. "And every night, when we put her to bed, she turns the lights on, which annoys the 4-year-old [Lincoln], and she will move furniture, and she bangs on the door with different, hard toys. We switched the door knob. We turned the lock on the outside." She continued:

I'm sorry, I know that's controversial, but we lock it when she gets in there, and we stand outside and say, "We love you, we will talk to you in the morning, but now, it's time for sleep." And after about 10 minutes, she'll wind herself down. And then, before we go to bed, obviously, we unlock it.

Bell seems to be well-aware of the fact that getting kids to sleep is a hot-button issue. There's the camp that's firmly planted in co-sleeping and/or bed-sharing, no-crying-at-all-costs methods. And then you have parents who swear by sleep training from the get-go. What's worse? Not all, but many at either end of the spectrum think their way is the magical answer for every child. Here's the thing, though: Every kid is different. What works for one child might not do anything for the next — within the same family, even.

Other topics that parents have strong opinions about that Bell has tackled head-on? Vaccinations, as she told The Hollywood Reporter back in 2015. "When Lincoln was born, the whooping cough epidemic was growing, and before she was 2 months old, we simply said [to friends], 'You have to get a whooping cough vaccination if you are going to hold our baby,'" Bell said, adding:

It's a very simple logic: I believe in trusting doctors, not know-it-alls.

Something else that Bell feels strongly about: public breastfeeding. More specifically, the mom has an issue with people who seem to think that breastfeeding in public is a shameful act — even breastfeeding mothers, themselves, as she told Babble. "When it comes to breastfeeding your baby, if you are too nervous to do it in public I think you are part of the problem,” Bell told the outlet. “Women should own the fact that we are superheroes for the first however many months of your child’s life. It is your opportunity and your duty to feed your baby should you choose to breastfeed and be proud of it." According to Babble, she continued:

I’m not saying you need to shove your boobs in everybody’s face, but there are tons of cover cloths. Breastfeed your baby with pride. If somebody is uncomfortable, that’s their problem. If someone sees an inch of your boob or areola and they can’t control their disgust or shock or sexual desire that’s on them.

I don't know about you, but I love the fact that Kristen Bell isn't afraid to give her two cents about topics many might consider controversial. (Because sorry, the benefits of vaccines are a proven fact. And breastfeeding is just feeding a hungry baby, for Pete's sake.) Struggling to get your kids to go to sleep when they're supposed to is something most parents can relate to. Even if Bell's methods don't resemble your own, it's nice to know that you're not alone in this wild shared experience of parenthood, isn't it?