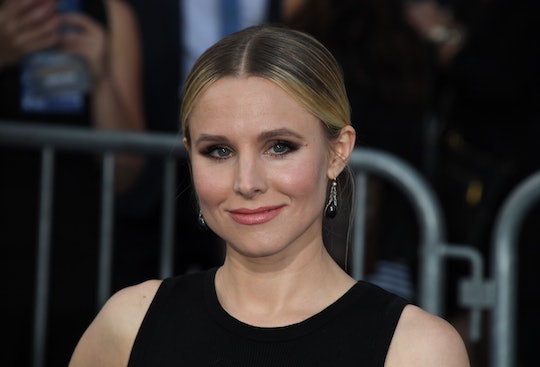 Kristen Bell's Daughter Forced Her To Dress Up As Elsa For Halloween, & The Photo Is *So* Funny

Letting your child choose your Halloween costume can be as amazing as it can be risky. Although kids can have a lot of creative and interesting ideas about costumes (did anyone on Twitter see the kid dressed up as a Spiderman-Batman hybrid?), they can also be pretty unrelenting once they set their mind to something. This is lesson many parents learn at some point, including celebrity moms like Kristen Bell. If you're a Frozen fan, you'll love this hilarious story about how Kristen Bell's daughter made her dress up as Elsa for Halloween.

On Sunday, Bell took to Instagram to relay a funny and relatable anecdote about her Halloween costume. According to Bell, one of her daughters "demanded" that she and Bell both dress up as *Elsa* for Halloween. Obviously, this is a hilarious request considering Bell was the voice of Anna in Frozen — not to mention Bell is probably tired of living her life through a Disney movie that came out four years ago. C'est la vie, right?

When your daughter demands you BOTH be ELSA for Halloween...you GRIN AND FORKING BEAR IT.

If there was an award for the most patient parent on Halloween, Bell would win in a landslide. Not only did Bell endure some low-key shade from her daughter with the whole Elsa thing, but she also had to parade her shame all around town. Poor Anna.

Side note: did anyone else catch Bell's The Good Place reference? Everything about this post is forking hysterical.

Of course, there is the possibility that this was Bell's daughter's payback for having to listen to her mom sing tunes from Frozen. In a Reddit "Ask Me Anything" thread from a few weeks ago, Bell revealed that her daughters, Delta and Lincoln, couldn't care less about Frozen and that they hate to hear her sing. Either Bell's daughter had a change of heart about Frozen, or some serious trolling went down this weekend.

Bell said of her daughters' IDGAF attitude about Frozen, according to the Daily Mail:

They don't really care. And they constantly tell me NOT to sing. They are BRUTAL.

In all seriousness, Bell did a pretty awesome thing by caving to her daughter's demand. There are only so many years that a parent gets to play dress up with their kid, so it's great that Bell took full advantage of the situation (even if it was at her expense).

For anyone who has followed Bell throughout the years, however, her commitment to her daughters' happiness should come as no surprise. In September, Bell revealed that she and her husband, Dax Shepard, make it a point to spend quality time with their two little girls. Bell explained, according to People:

Normally we don’t do anything on the weekends except experience life with our kids. Every now and again we split them up and have one on one time. I feel like that deepens our experience with them and our knowledge of who they are and who they’re becoming, as opposed to making just the herd of the family getting through breakfast or getting through nap time. Really taking that one on one time to put our phones down and enjoy who they’re becoming.

Because Frozen 2 isn't going to hit theaters anytime super soon (not until Nov. 27, 2019, to be exact), it's likely that this Halloween won't be the last time Bell will have to dress up as a Frozen character. One can only hope that Bell's daughters will throw her a bone in 2019 and let her dress up as Anna — there's only so much shade a mom can take, right?

More Like This
Heidi Klum's Daughter Leni Wore Her Mom's Dress From 1998 To Prom
Kate Middleton Explains Why Her Kids Couldn't Attend The Top Gun: Maverick Premiere
'Hocus Pocus 2' Officially Has A Release Date To Look Forward To
Zac Efron Was Asked If He Wants Kids & His Hilarious One-Word Answer Says It All