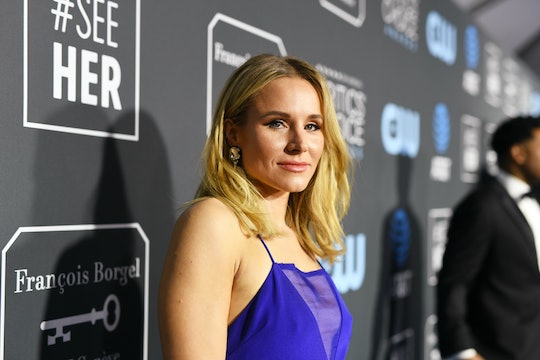 Kristen Bell's 3-Year-Old Daughter Wrote A Song About Farting & Guys, It's A Bop

Kristen Bell and Dax Shepard are two talented actors — so it makes sense that their young daughters — three year old Delta and four year old Lincoln — are following in their footsteps. Sure, Delta may be young, but she is already proving she has an incredible gift for songwriting about flatulence. Yes, Kristen Bell's daughter wrote a song about farting called "Oopsies" — and it just proves that talent runs in the family.

The best thing that parents can do is to support their children in all of their endeavors, especially when they're young. Bell clearly knows this to be true — which is why, on Thursday, she dropped a hot bop, written by her daughter, to streaming platforms. But the incredible power ballad, composed with the help of Bell's friend, musician Bob Mervak, just so happens to be about farting, which is absolutely perfect.

"This gem started as a little tune he created with my 3 year old daughter in our living room and has now grown into a full symphonic masterpiece," Bell wrote on Instagram. "I am in constant awe of his gift and feel so lucky to know this walking reminder of the power of music. Recording this was some of the most fun I've had as a grown up."

Luckily for everyone, "Oopsies" is available to stream on Spotify, YouTube, and iTunes right now. And needless to say, it is definitely worth listening to, because the song is a certified hit.

With lyrics like "Look at you standing there/just breathing this filthy air/but baby when you give me a hand, you'll understand/it was an accident/just let me explain" — it's hard not to fall in love with the song, especially since the lyrics are so relatable. Who hasn't accidentally let out a fart? And who hasn't heard their three year old make up a completely inappropriate song before? These things happen. But Bell just so happens to be the first genius to set those inventive, random lyrics to music.

Fans on Instagram are loving the track, especially since the lyrics are a little too on the nose.

"A total eclipse of the fart," one commenter wrote.

"This is the kind of nursery rhyme we deserved as babies," another commenter added.

"This song was written about me during yoga class," one brave commenter chimed in.

Bell and Shepard's support for their daughters and their commitment to being honest with them is admirable. Even if Delta never wants to be a singer, songwriter or work in the entertainment industry, at least she knows that she is capable of doing anything she puts her mind to. And that is the best knowledge to have. During an appearance on The View in October 2018, Bell said that she never wants her daughters to stop learning.

Rest assured that she is doing just that, especially after creating such an amazing song inspired by her daughter and her incredible way with words.