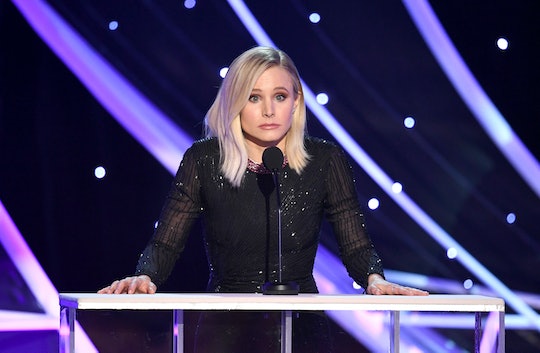 I'm not sure anything can adequately prepare someone for all of the gross experiences that come with parenthood. Childbirth aside, caring for a tiny human can be downright disgusting. I mean, who knew that baby poop could be expelled at such an explosive force that it shoots up their back and into their own hair? Or that such an adorable little baby could spit-up/projectile vomit that much milk in one day? I'm willing to bet we all have a scarring tale that essentially initiated us as parents. And Kristen Bell's story about catching "anal worms" from her 3-year-old daughter, well... it's as real as it gets.

“I did have anal worms two weeks ago — I swear to God,” Bell told McHale, according to People. “They’re called pinworms. My kids had them.” When the host asked if having pinworms was painful, the honest mama — who famously doesn't shy away from a little TMI — replied, "No, but it was very itchy." And then Bell said something that will forever haunt my dreams. "I’m not here to talk about pinworms, but I will, she said. "Fifty percent of people over 15 don’t experience symptoms, which is the itch. Your kids get them because they put their hands in their mouth and they lay eggs."

The horror! So how did Bell end up with pinworms, anyway? If you remember, she and her husband, Dax Shepard, are parents to two daughters — Lincoln, 4, and Delta, who's 3. As Us Weekly reported, Bell noticed all of the carpets at her daughters' preschool were gone one day. The reason? They all had to be cleaned because of a pinworm outbreak, according to the publication. A quick Google search taught the concerned mama that pinworms are extremely contagious. (Fun fact: According to the New York State Department of Health, pinworms are white and about a half-inch long — and they're the most common worm infection in the United States). As luck had it, little Delta was soon itchy in *that* area.

“You have to monitor, and you have to look in their poop,” Bell told McHale, according to People. She continued:

And when you wipe their butt, sure enough — I wiped, and saw a little white worm. I know, she’s really gross. My daughter, not the worm. The worm was gross, too.

As gag-tastic as Bell's story is, it seems fans once again love the actress for her brutal honestly.

Others thought it was a bit much...

In fact, for some Twitter users, it seems the story sealed the deal that kids will not be in their future.

Still, it's not like this is the first time Bell has been completely open about struggles that most people might not share with the general public. Like that time Dax Shepard helped her out when she had mastitis, as Cosmopolitan reported. (Spoiler alert: He sucked milk out to relieve her discomfort.) "I said to my husband, 'I really need you to suck this out. We could talk about it, we could be weird about it, or you could just go ahead and nurse,'" Bell said on an episode of the miniseries Momsplaining. She continued:

He pulled it out. He had a cup next to him. He was pulling out and spitting into this cup, and I’ve never been more in love in my life.

And then there was that time when Lincoln and Delta walked in on their parents having sex. "That's how they were made, it's OK!" Bell said while on The Talk in November, TODAY reported. "We didn’t like, continue ... we sort of just went like, ‘Hey, what’s up? What do you need? What do you need?’ And then we just said, ‘Mommy and daddy are going to take a nap for a couple of minutes.'”