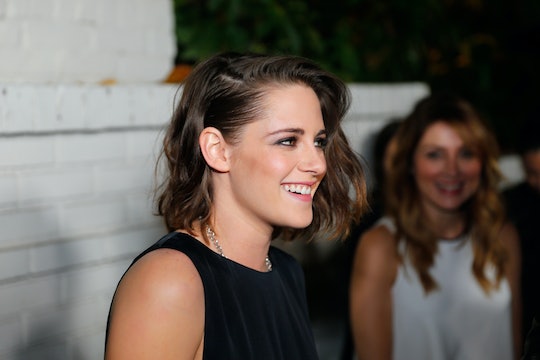 During a recent E! interview at the 2016 Sundance Film Festival this week, 25-year-old actress Kristen Stewart discussed diversity in Hollywood, managing to drudge up a majorly apt point despite initially seeming shaky on the topic. When the E! interviewer asked Stewart about the issue of diversity (or the lack thereof) in Hollywood during her turn on the red carpet, Stewart at first appeared downright panicked. She joked sarcastically that she had "all the answers," and then admitted that she just didn't know. Quite the shaky start.

Luckily, Stewart managed to collect herself and went on to make a pretty interesting point. "How to fix that, I have no idea, but, you know, one cool thing about independent movies is that we’re kind of untouched," she said. "Like the cool thing about Sundance is we are really fairly untouched by the political nature of who gets the pats on the backs [and who doesn't]."

Unsurprisingly, it turned out that Stewart's comment was backed by a recent study at the Annenberg School for Communication & Journalism at the University of Southern California. The report, which was released last fall, was initiated at the specific request of the Sundance Institute, which wanted to know if the independent films that Sundance backs really do showcase diversity more than mainstream Hollywood films. The answer, it turned out, was yes.

The study looked at 900 films selected and screened by Sundance between 2002 and 2013, and found that 20 percent were directed by one or more underrepresented racial or ethnic groups. By comparison, another Annenberg study looked at 700 top-grossing Blockbusters between 2006 and 2012, and found that only 10.7 percent were directed by minority directors. That's a pretty huge difference.

Still, Stewart’s claim that Sundance is “untouched” by the politics behind who does – and doesn’t – get hired by film studios is optimistic at best, especially considering that Sundance itself was unhappy with Annenberg’s findings. The study also found that while Sundance films were more diverse compared to mainstream films, there were still significant problems, particularly where gender is concerned. For example, 94.1 percent of minority-directed films that premiered at Sundance were directed by male minority directors, while a shockingly low 5.9 percent were directed by female minority directors.

Thankfully, many women have indeed “done something” about gender diversity, including April Reign, who created the #OscarsSoWhite hashtag, and Jada Pinkett Smith, who will join Spike Lee in boycotting the Oscars this year. It’s this type of “doing something” that led the Academy of Motion Picture Arts & Sciences to implement a major new membership policy that will lead to more diversity amongst its membership.

So, while Stewart isn't the best voice for diversity in Hollywood, we're thankful there are others who are — and that Stewart is at least saying something.