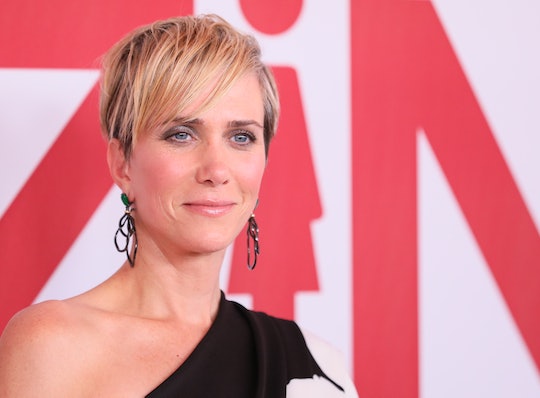 Sounds like congratulations are in order for one happy couple! According to multiple news reports, actress Kristen Wiig has reportedly welcomed twins via surrogate with her fiancé Avi Rothman.

While Romper's request for comment from Wiig's representative was not immediately returned, sources have reportedly confirmed the exciting news to People and Us Weekly. Both outlets have reported that the couple welcomed twins earlier this year via surrogate, but not much else is known about their bundles of joy, like their names, sex, or when exactly they were born.

One thing that is certain? The hilarious actress has been open about wanting to be a mother in the past, but told Entertainment Tonight in 2015 that she wasn't in a huge rush to have kids. "I have a daughter who is a dog," she joked at the time. "I've got some great plants that I've had for a long time that I feel like are my children."

However, things change. The couple got engaged last year after they started dating in 2016, according to People. Rothman is a writer, producer, actor, and director with a comedic background, just like his bride-to-be. He's most well known for his web series where he starred as "Ogden the Inappropriate Yoga Guy" which just as funny as it sounds.

Wiig had fans speculating that she could be expecting in early May, when she appeared on Saturday Night Live At Home, and gave the opening monologue. In the Mother's Day themed monologue, 46-year-old Wiig expressed sadness that she was not able to be with her mom. "I'm so thankful for everything she has taught me, preparing me to be a mom myself," she said. Sounds like those lessons from her own mother will come in handy with her two bundles of joy.