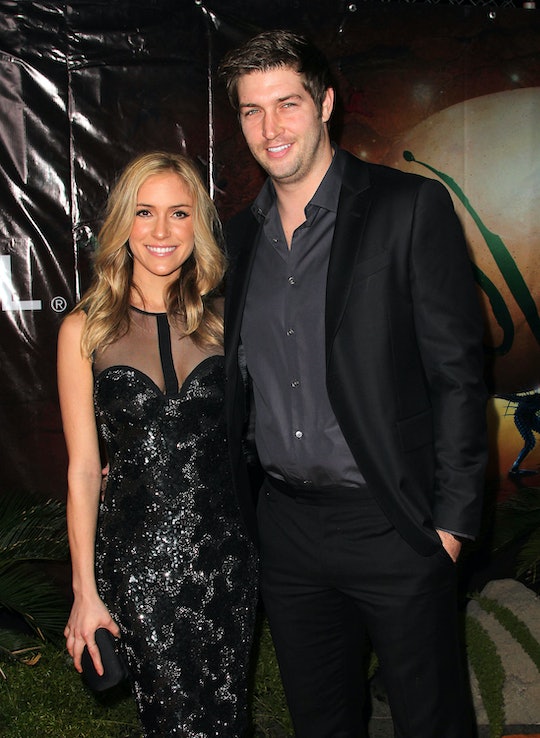 Breastfeeding comes with a slew of struggles, and desperate times often call for desperate measures, especially if those measures bring relief. And no one knows this better than a certain reality TV star. Recently, Kristin Cavallari revealed Jay Cutler sucked her clogged breast ducts when she was dealing with a pretty painful situation. Talk about a super husband, right?

On Cavallari's E! reality show, Very Cavallari, she doesn't really hold anything back. On her show, 32-year-old Cavallari often gets honest about her life as a mom of three. And in a preview for an upcoming episode of Very Cavallari, as In Style reported, Cavallari shared a very funny and brutally honest story about breastfeeding and how she had clogged breasts ducts while she breastfeeding their kids. And to fix the problem, Cavallari relied on her husband's help and, well, his super suction.

"I had like, major clogged ducts," Cavallari says the clip. "Jay had to get them out for me. Sucking harder than he's ever sucked." Cavallari added, "You know what? Saved my life."

Whatever gets the job done, right?

There are some things people do for love, and this is definitely one of them. Kudos to Cutler for stepping up for his wife while she was dealing with a painful dilemma.

Cavallari was likely suffering from a common breastfeeding struggle called mastitis. According to The Mayo Clinic, mastitis causes inflammation in the breast tissue that can sometimes lead to an infection.

"If a breast doesn't completely empty at feedings, one of your milk ducts can become clogged," The Mayo Clinic explains. "The blockage causes milk to back up, leading to breast infection... Stagnant milk in a breast that isn't emptied provides a breeding ground for the bacteria."

People on Twitter are really loving this story, probably because it's both hilarious and quite relatable for fellow parents. And, TBH, Cutler going above and beyond to help his wife might just be the next big meme, guys...

Cavallari and Culter are parents to three children; 6-year-old son, Camden, 4-year-old son, Jaxon, and 3-year-old daughter, Saylor James, according to People. And since Cavallari was breastfeeding at three separate times, it's likely that she's had her fair share of breastfeeding struggles over the years.

Now, if Cavallari didn't want to or couldn't enlist her husband to help out with this dilemma, there are a few solutions she could have tried out as well. According to What To Expect, moms with clogged ducts can try pumping to loosen the clogged breast duct, switching their breastfeeding position, or applying a warm compress to the clog to help the milk flow. And, according to WebMd, mastitis is a pretty common condition in nursing women and can be painful, so thankfully Culter was there to provide his wife with some relief.

Really, Cutler's ability to help his wife during such a trying time is pretty admirable on his end, don't you think? You have to hand it to him for stepping up to the plate and "sucking harder than he’s ever sucked."