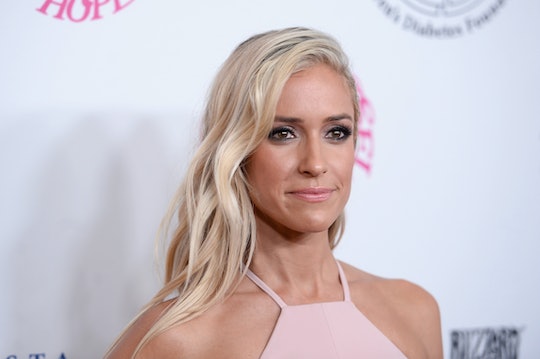 Kristin Cavallari's Advice To Her Kids About Fame Is Incredibly Smart

I'd imagine it's difficult for children of celebrities to grasp the concept of their parents' fame, not that I can speak from experience or anything. But dealing with cameras flashing in your face when you're out in public and having strangers call out out your name while you're shopping aren't exactly so-called normal childhood experiences. And when you throw school into the mix, that's when things can get really murky. This is exactly why Kristin Cavallari's advice to her kids about fame is so compelling, and seriously smart.

In case you've lost track, the former The Hills star shares three children with her husband, retired NFL player Jay Cutler: Camden, 7, Jaxon, 5, and Saylor, 3. Cavallari often talks about her adorable children, especially where it concerns their development. So it's no surprise she dished to Us Weekly Tuesday about the fact that her two oldest children are aware of their parents' fame.

“My daughter has no clue … but my boys do,” she told the publication about her kid's level of awareness. “Especially Jay, because of football. They got that when he was playing games. That’s an easier thing to understand!"

As for Cavallari herself, kids at school are especially curious to know more about her life. "They know I have a store, but if they see me on TV hosting, I don’t think they really get that," she said. "But now, older kids are starting to ask them at school about us.”

Cavallari isn't worried about the questions, however, as she believes it could come in handy for her kids, stating:

LOL. I mean, I can't really blame Cavallari. Kids at school can be so mean, so whatever her kids can do to avoid being bullied, more power to them, right?

“My kids will not be on it,” she recently told People, of her reality TV show Very Cavallari. “They would love to watch the monitors and they were around sometimes when we would film, but we want to keep them kids. ... We want them to grow up as normal as possible. And so when they’re old enough to decide they want a camera in their face, that’s one thing, but for now we just want to keep them kids.”

Cavallari takes a similar approach when it comes to sharing photos of her children on social media, according to HuffPost. Because although she does post images of her kiddos from time to time, it's always the backs of their heads or with something obscuring their faces.

Although I don't agree with everything Kristin Cavallari does or says about parenting (like her views on vaccinations, for example) I do admire the way she's protecting her kids' privacy. That's because Cavallari isn't encouraging her children to parade around the fact that they have famous parents, rather she advises them to use it to their advantage, which makes perfect sense to me.