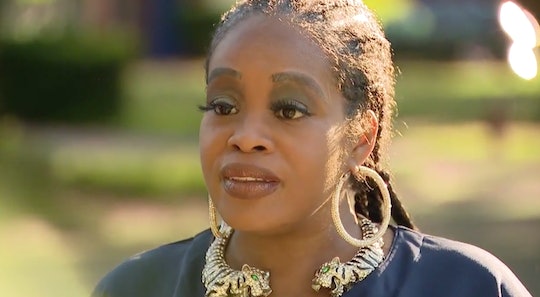 As anti-racism protests continue in cities across the country, video footage has surfaced in which a white woman appears to police the actions and movements of a Black woman. In the video, a white woman, who has since been nicknamed "Kroger Karen," blocks a Black mom from leaving a parking lot by using a stroller to box her car in.

"I have a woman standing behind my car, telling me I cannot leave," Shaneeka Montgomery-Strickland said in a Facebook Live video she filmed June 13 in the parking lot of a Kroger in Livonia, Michigan. "This is ridiculous. She is not letting me leave out of a parking lot after she was rude to me and my children and disrespectful outside."

Montgomery-Strickland told Fox 2 Detroit the woman had become "irate" after she saw her son briefly step on a bottom shelf in the grocery store so that he could reach a bottle of Gatorade placed on a higher shelf. "I told her please don't yell at them and then she started yelling at me," Montgomery-Strickland told the news outlet. "I said, 'You don't have to yell at me, they got the Gatorade.' And a lot of people, if you're short you're going to go up there and grab what you need. There's not a lot of workers in the aisle, you have to do what you have to do and you move on."

"I'm out here trying to do my job, me and my kids — do you see this lady? Standing here behind my car refusing to leave," Montgomery-Strickland said in her Facebook Live video, which has gone viral after garnering more than 200,000 views.

Montgomery-Strickland later told Fox 2 Detroit she felt it was important to document the encounter so others could see the ways in which Black people have their actions policed by others. "This needs to be known. You can't just stay hush hush about everything and keep on letting people get away with nonsense," she said. "Why are they still out here doing this after all that's going on, all the changes we're trying to make? After Black Lives Matter? It makes no sense."

The majority of people responding to Montgomery-Strickland's video condemned the white woman's actions and quickly named her "Kroger Karen," a derogatory reference to white women who use their privilege to police, intimidate, or threaten others, especially Black people. Many hailed the white woman's actions and outrage at being filmed while attempting to physically prevent another person from moving freely about in public as a clear example of racism and white privilege. "It's clear racism and privilege," one person commented.

In a second Facebook Live video Montgomery-Strickland filmed from her car immediately after the incident, she expressed frustration her kids had to experience that. "I hate that the kids had to see that, but now they see," she said. "They were, like, 'That lady is racist,' and I say, 'Yeah, she is,' because there was no cause for it ... She basically attacked us without putting her hands on us."