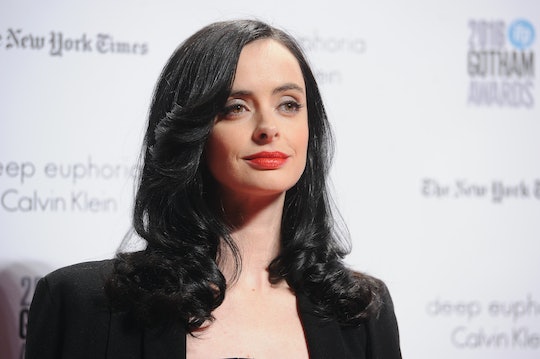 Krysten Ritter Reportedly Welcomed Her First Child — A Boy! — With The *Cutest* Name

They're officially a family of three. After months of anticipation, Krysten Ritter has reportedly given birth to a baby boy, according to Extra!, citing reports that a birth certificate was filed in the state of California. Though Ritter nor her boyfriend Adam Granduciel have publicly commented — nor posted — about their new son, the certificate does share his name, which is super sweet and creative.

Romper's request for comment from Ritter's rep was not immediately returned, but TMZ and Extra! have reported that Ritter delivered her first child on July 29 and chose a truly adorable name. According to TMZ, Ritter's son's name is reportedly Bruce Julian Knight Granofsky. So cute!

Ritter first announced that she was pregnant at the Oscars earlier this year, People reported, in perhaps the most casual way possible. She walked the red carpet while wearing a red lace dress that accentuated her stomach. On her own social media pages, she posted photos of herself with Granduciel, captioning them simply: "OSCARS!!!" She did not make mention of the pregnancy until a bit later in the day, when she uploaded a few photos of herself at the event, saying: "Surprise!"

Afterwards, Ritter consistently made headlines for all of her pregnancy-related content, sharing her very cute maternity outfits as well as some amazing bikini shots. She was lighthearted, body positive and all around a champ when it came to her pregnancy, but did anyone expect less?

Though Ritter is beginning a new chapter in her personal life, when one door opens, another has to close, or so they say. Earlier this year, she spoke with Uproxx about the ending of Jessica Jones, and what it was like to work through the first trimester of her pregnancy.

"I can’t believe, like with the whole junket day, nobody asked me if I was pregnant when we were filming. I was in my first trimester while shooting Jessica Jones, which was interesting. It was a secret, and the funny thing is that when I finally told people, at like, when I was much further along, nobody seemed that surprised from the show," she began.

She went onto joke that despite nobody making a comment, a few people did speculate that she could be expecting. "I asked... one of my girlfriends, who runs our first team, I was like, 'Oh, that probably explains why I all of a sudden started ordering pancakes all the time?' And she said, 'Oh, I had a feeling…' I think more people probably had an inkling that this was happening than I thought. I thought it was very under wraps, and I don’t know if it was," she concluded.

She later told TV Line that she did not anticipate a Jessica Jones revival anytime in the future. "Do I think I’ll play her again? I don’t think so... I feel like I’ve played her, you know? I feel really good about it. I feel good about closing the door," however, it seems that she has plenty of exciting opportunities on the horizon.

Right now, it's clear that Ritter is focused on her new life as a mom, and perhaps will announce her next career moves in the future, or not. To each their own, as they say. In the meantime, we'll be waiting patiently to catch the first glimpse of Bruce, whenever she feels comfortable to share.