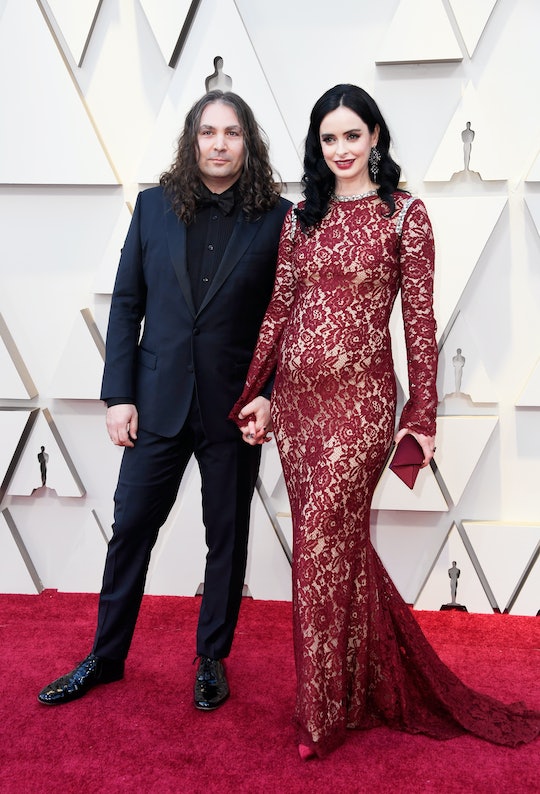 Among the surprises at the 2019 Academy Awards was a baby bump debut from Jessica Jones herself! Krysten Ritter revealed she's pregnant on the Oscars red carpet and showed off the big news in a form-fitting maroon lace gown.

Designed by Reem Acra, according to People, Ritter's Oscars dress featured a small train and rhinestone embellishments at the high neckline and shoulders. She paired the gown with a deep red lip, a matching matte red envelope-style clutch, and brighter red shoes for a modern monochromatic twist. Standing by her side in a navy suit was Ritter's partner and War On Drugs frontman Adam Granduciel.

According to Us Weekly, they first got together because Ritter was a fan of his music. "It started with her being a fan of the band and then somehow she got in touch with him and went to some shows," an anonymous source told the magazine in 2014. The two have been together ever since, but never married. This will be the couple's first child.

Ritter presented at the Oscars this year, and from the looks of the Instagram selfie she posted from the audience, it seems like the 37-year-old actress was super excited to be there. The plum gig was some well-deserved good news, considering Netflix just announced it would be canceling Jessica Jones, according to Deadline, as well as fellow Marvel series The Punisher. Iron Fist, Luke Cage and Daredevil were all canceled last year as well — some speculate because of Marvel TV's freshly inked deal with Hulu Plus, as People noted. Disney+, a new streaming platform set to launch this fall, will also reportedly host new Marvel shows.

"We have decided that the upcoming third season will also be the final season for Marvel’s Jessica Jones," Netflix said in a statement, according to People. "We are grateful to showrunner Melissa Rosenberg, star Krysten Ritter, and the entire cast and crew, for three incredible seasons of this groundbreaking series, which was recognized by the Peabody Awards among many others."

In addition to winning a Peabody, the series has also nabbed an Emmy and a Hugo Award. Ritter's pregnancy reveal comes just six days after the sad Jessica Jones news. In an Instagram post following Netflix's announcement, she wrote a heartfelt goodbye note to the show's cast and crew. Captioning a photo taken after the series finale table read, Ritter wrote in part:

I love these people to the moon and back. It has been a dream to play Jessica alongside my amazing cast and the best crew in the business for these past 5 years. I am so grateful for every second of it. We have THE BEST fans. You guys mean the world to me and I appreciate you beyond words. The final season of #JessicaJones is coming later this year and I am proud of how we complete JJ’s journey. I can’t wait for you all to see it. Stay tuned and more to come.

Her next big project looks like a starring role in the film adaptation of David Lindsay Abaire's play Fuddy Meers, alongside David Tennant and Ellen Burstyn.

Hopefully, in the meantime, we'll get to see some more adorable glimpses of her growing bump and sweet updates once her bundle of joy arrives.